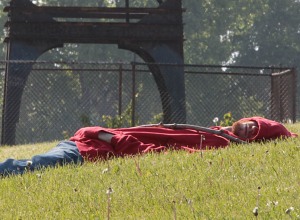 Hemant Mehta posted about a godless guy named Dale McGowan who filled out a design form with a Christian design firm about creating a web site called “Foundation Beyond Belief,” an organization that will focus on humanist generosity and allow for charitable giving from atheists. The “Christian” design firm responded that McGowan’s godlessness goes against said Christian’s core values, and their firm would not be a great fit for designing the site. Godless McGowan responded in kind, and walloped the guy with a brilliant response.

“Thanks so much for your reply. I must agree, we would be a very poor fit — but not because you are committed Christians.

Our foundation is dedicated primarily to the encouragement of charitable giving among the nonreligious but will be supporting both religious and secular charities. I would only want to work with someone who shares those values of generosity and openness, who sees the importance of reaching across lines of difference. Thanks for letting me know that you don’t agree with such values.”

I like McGowen. He has YouTubed a couple videos about parenting as non-believers. His efforts are bridging the gaps between belief and non-belief in other respects. I think he’s doing important work.

When I was a believer, I thought that the meaning of Christianity was to get in with the other guys, get toe to toe with the other religions and varieties of beliefs. Why? Because Jesus taught about it, and I was a follower of Christ. I believed that if Christianity was so great, than nothing could stand in the way of its greatness. The older I got, the more I heard the opposite recommendations. I wasn’t supposed to act like the good samaritan. I wasn’t to go in bars or in evil doers homes. Those things could threaten my faith.

Politically, I was told the opposite of what I believed. I thought being like the good Samaritan was giving to the poor, giving out welfare, putting clothes on people who were in need, which includes the lazy, the filthy, the poor, and the idiot humans — for which there seem to be many. The more I looked at the church, the more I heard the message, “Don’t support welfare. Don’t support the lazy.” Yeah, the poor will always be among us, but then again, it’s easier for a camel walk through the needle. I hated all the contrasting messages.

I choose the gutter.