A collection of Yeshuas found on various items and reported on TV.

Here’s an image of almost an entire wedding party experiencing an act of godly hate. No kidding, the main universe’s deity HATES men and women getting married.

Why else would he allow/cause/let this happen?

I’m being a jerk. I should have titled this one, “Nothing like going for a dip on your wedding day …”

Or, There’s a sign just outside of frame that reads, “Weight limit 500 lbs.”

I stopped by Joe My God today and there were too many items I wanted to post from there. So I’m going to collect them and post them at once.

I hope you don’t mind.

I hope he doesn’t mind either. He’s been known to kick ass … in a good way.

Joe is seriously one of the best blogs out there. So go visit him. 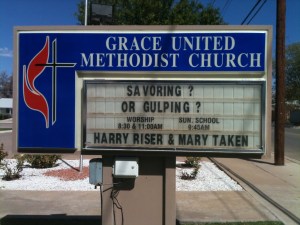 Be sure to check out this great video: The GOP Vagina Rules:

And this quote from Barack Obama:

“I mean has anybody been watching the debates lately? You’ve got a governor whose state is on fire denying climate change. It’s true. You’ve got audiences cheering at the prospect of somebody dying because they don’t have healthcare. And booing a service member in Iraq because they’re gay. That’s not reflective of who we are.” – Barack Obama, speaking at a Democratic fundraiser yesterday.

And finally go check out this story about NYC Cops pepper spraying street protestors and arresting over 100.

Over the weekend, Tina and I shot three different runway shows.

The above photo is from a show last night. Every year I shoot, I look back and see personal growth. I have failures that I turn into great learning experiences.

Technically, I’m not sure I would have known how to grab the shot above a year ago. I would have depended on an on-camera flash for one instead of a portable strobe and a battery pack. I would have used a slower shutter, and there would have been motion blur.

But the fact that you can see every single bit of that fabric, sharp and in focus, makes me feel a bit … erhm … orgasmic.

If you click on the image to enlarge, you can even see a stray thread out toward the edge (close to the crowd). I didn’t alter the image except for the crop. I cropped it to make it less obvious about where and who it is.

I still have so much to learn. But this is a milestone for me … and I wanted to stop and showoff for a second.

It’s official. Even police know what people like me have been saying for years … church is equal to punishment.

If you break the law in Bay Minette, Alabama, you can either serve time in prison or in church … your choice.

I never expected anyone to validate that church is punishment. I hope they seat these prisoners away from any bibles. I wouldn’t want them getting any ideas about God-approved baby killing or raping the women in the pews around them if they read it.

Over the weekend, Luis V. posted on Facebook that he was amazed at how much memory his photos take up. He wrote, “Holy crap! Photo backup took up 83GB worth of space. Had no idea.”

I said something snarky, because my life is measured in gigabytes and terabytes. Between video and photo files, I have to maintain an incredible amount of space.

It sheds a twisted light on “something from nothing,” if you ask me.

The idea of digital media makes a person wonder, “Holy crap, what do I do with all this shit?”

It’s true. With advanced technologies, we take way more photos than we did five years ago … hell, more than we did one year ago. I remember the first digital camera I ever used in college. It was a piece of shit. The files were 500k and they looked like crap in print.

Over the weekend, I filled several 32 gb cards with photos and video. It’s insanity.

The above graphic is what some people do with their photos. Check out the source for this graphic here.

Deron Bauman at Clusterflock pulled out several bullet points from the above article that discusses the history of photography and what we do with photos, which I thought were great, and I’m going to lazily post them here as well for you to review:

the 20th century was the golden age of analog photography peaking at an amazing 85 billion physical photos in 2000 — an incredible 2,500 photos per second.

When the first few hundred thousand digital cameras shipped in 1997 their memory was strictly limited (in fact cameras like the Sony Mavica took floppy disks!).

That might sound implausible but this year people will upload over 70 billion photos to Facebook, suggesting around 20% of all photos this year will end up there.