Many of you remember the portrait I took in October of my dad.

I took pictures of my family on our trip, and I’ve been too busy to even look at the ones of my mom. Dad wanted his picture ASAP, which meant my mom didn’t get her shots.

While on the phone earlier, my mom asked me about the shots. “Did I break the camera?” She asked.

Later that evening, I found the shots and worked with them a little. Here is one of the shots I came up with.

The face above is a woman who went out of her way to make sure I learned to think for myself. I don’t think she ever intended that I would take free thought as far as I did, but she promoted it all the same.

She didn’t want me thinking like everyone else just because I was told to do so. She wanted me to discover my own way, my own thoughts. And I am forever grateful for that.

My mom is a fighter. She’s a strong woman, and a role model for any person, male or female.

She’s got battle scars from a life-long battle with Diabetes Type 1. Many of the scars you could see. Many, you probably can’t. And never will.

One thing’s for sure, she’s a role model for me. I love her.

I’m glad I got a chance to shoot this shot of her.

What a beautiful woman.

Also of note: man takes out obit in local paper for his mother to sell an excuse to get out of work. Only mom’s not really dead. And man is charged with crime and with never-ending embarrassment. Read more.

Also of note is this post at The Daily Wh.at about the composer for Rick Perry’s Strong commercial being a gay Jew with a tendency to promote communism.

I somehow missed a sweet tweet from @JoeMyGod. He saw my kvetch about not giving me a link on his blog, and he totally fixed it. JoeMyGod hooked me up with a link with the mention. See this post for reference and this for the hookup.

It’s amazing how atheist prayers are so effective.

And by prayers I mean bitching and moaning.

As many of you know, I have an on-going series in which I post what those annoying atheists over at reddit.com/r/atheism are posting. I call the series, “What the kids are posting.”

But this is a twist called, “What the kids are up to.”

Instead of their offensive graphics and jokes, here’s a story that regular-reader Paul just sent me that you need to check out. I’ll post some of the story below. Read the rest here.

Disbelief has never been so evil.

(Reuters) – Atheist bloggers have shown their charitable side by swarming to donate money to Doctors Without Borders, in what turned into the humanitarian agency’s biggest online fundraiser.

Doctors without Borders (DWB), also known as Medecins Sans Frontieres, gets about 4,000 hits on its U.S. website on an average Sunday. Last Sunday that number ballooned to 50,000 as a horde of redditors, subscribers to the social media site reddit.com, thundered across the DWB homepage.

Thousands more clicked through from the atheism sub-reddit, a site normally given over to finding holes in religions and picking fights with creationists, and headed for a dedicated site at firstgiving.com, where they have so far given $180,000.

“It’s amazing, what’s going on. The amount being raised is amazing, definitely,” said Natalie Favre, an MSF spokeswoman in Geneva. “We don’t control any of this.”

“I WAS gonna buy some Taco Bell… but screw it,” wrote DJW3NCH, who donated $5.00 via firstgiving.com.

I meant to include that this probably won’t change the public perception of atheists as worse than rapists, that regular-reader Xina reminded me of recently via Twitter. 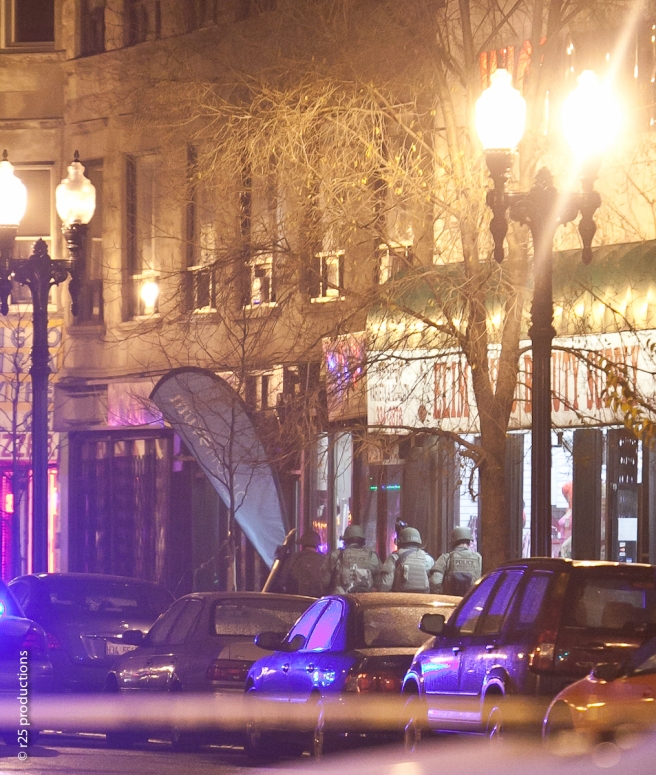 Earlier this week, we heard that a dangerous crime scene had formed just a couple blocks north of our condo. One of our neighbors called to ask if she could hang out at our place until the police allowed people back in their homes.

She was on her way home from work and the roads around her house were shut down. And she was scared to go home until the coast was clear.

Word on the street was it was a hostage situation. Fact was, no one knew exactly what was happening. There were mixed reports.

The trains were shut down, and blogs and news agencies were telling locals to stay home and stay safe.

Out of curiosity, I walked up to the crime scene barricades where I took some photos. A perimeter was set around the scene, and there were SWAT teams visibly inside the zone.

You can see a well-armed group of men in the shot above headed for the apartment in question.

Outside stretched yellow police tape were swarms of police cars and armed officers keeping a large group of onlookers and press from entering the zone.

I stood there with my longest lens taking photos, which to most people is impressive. But there were press guys around me with much longer better lenses. My lens was fun, because I could take photos of the people around me. Which I did. And it was the most interesting thing I saw that night.

Occasionally someone would walk up to the mob of onlookers and ask, “What’s going on?” And one of us would turn and say his/her version of the event.

One would say, “There’s a fugitive situation up there with several very armed murderers holed up inside an apartment.”

Another would say, “There’s been a shooting, and the killer went into a residence up there and took innocent people hostage. Some of the older people have been released.”

These people answering were news media. Reputable sources for information, right? We were all there at the scene of the crime. Police officers were within arms length. They could hear one person telling another person what was happening.

When I answered a few of the questions thrown out, I said, “All I know are the rumors, and that’s …”

Later in the week, Tina read me an article that explained the events. Apparently, there were four people wanted for murder in South Bend who fled here. They were in an apartment that is a known arms distributer.

One guy escaped on foot and was running, but was picked up. The other three were thought to be armed, but not sure how heavily. They were holed up in that apartment.

The three others holed up, but the police were proceeding with great caution.

When I got home that night, I told Tina about the onlookers and all the questions for people who didn’t know what was going on. I told her about the different answers from different mouths.

“Which is freaking why I can’t believe anyone takes the whole ‘eye witness’ thing in the bible seriously!” I abruptly changed the subject. “We were all there standing near by the scene and even the news kids couldn’t get the story right.”

Tina looked at me and said, “It always goes back to that, huh?”

“Hurry dear. If you miss the bus, you’ll have to walk ’cause mommy can’t drink and drive”