Tina and Talulah decided to commandeer Wedenesdog this week with a drive-by shooting of cuteness followed by a brain-exploding cuddle bomb.

Above is a shot of T-dog waiting for me to get back to the car from grocery shopping. She’s keeping the seat warm for me.

The other shot is Talulah under Tina’s electric blanket. Those lips are made for kissin’. 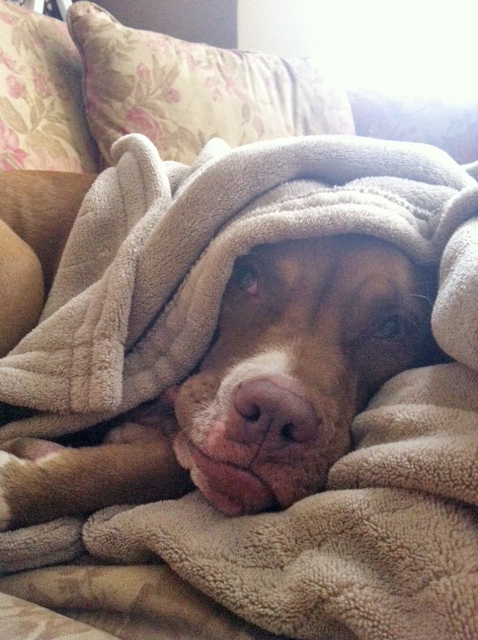 The results are in. While Tina and I are in Bali, George W. is going take the helm of this ship and steer it straight toward the most glorious horizon possible.

I couldn’t be more excited.

George will don the head-chef hat, while I ease back with cocktail in hand on the sands of Bali.

He promises that he’ll get a couple/few posts a day on the blog while we’re gone. That way, you all will have something to look forward to, and wandering sailors looking for somewhere to park their butts for a while won’t pass us by completely for two weeks. He even plans on hitting Wednesdog and Caturdays.

I expect you all to behave better or far worse while I’m gone.

Don’t forget. He has a little baby, a job and a bit of a life, so don’t get all huffy when he doesn’t rush to your table every second of the day with refills. 🙂

So let’s all give George a warm squeeze to his rump and welcome him to the driver’s seat.

He’s going to do great. I’m looking forward to it. I hope you do, too.

“I can’t believe it,” says Pope Mohammed  standing over a toilet gripping the handle of a plunger. You are looking on leaning against the frame of the doorway.

“I can’t believe it,” repeats Pope Mohammed, breathing heavily as he plunges repetitively. “It gets clogged so easily.”

The fart sound of water sloshing around  in ceramic echoes throughout the bathroom. Pope Mohammed’s pants are wet around the knees.

Once the tank refills with water again, Pope Mohammed pushes a test flush. The water exits quickly. It sounds like that old cash register sound but under water.

Behind Pope Mohammed sits a barrel of cash. It’s chockfull of currency from all over the world — euros, dollars, rupees, etc. When Pope Mohammed asks for large sums of money from his vast, dedicated followers, they send checks in droves.

Pope Mohammed signs the back of each one, takes them to the bank, cashes them, and fills up water barrels around his home with money. Once a week, you’ll find Pope Mohammed heaping handfuls of cash into the toilet, and flushing all of it.

As he peels a wet $100 bill from the back of the toilet and drops it in the water, Pope Mohammed says, “All this shit ends up in the same place, anyway, doesn’t it?”

You watch as Ben Franklin’s face twirls around the bowl a few times and disappears.

Apparently the IRS is made of people and not robotic evil machines that want to attack you and your income with audits and penalties.

The above letter is proof.

Check out the line that says, “[B]ased on your explanation that the “adult brain turns to jello those first few months raising a baby”, we have decided to remove all penalty charges. A total of $2,522.00 in penalty charges has been removed.”

Notice they didn’t say, “The adult brain turns to jello and we’ve decided to market that product and sell it to raise money for the United States government.”

That was nice of them.

All hail the IRS!

Matt Dillahunty says, “If I have done wrong to another person, the correct course of action is to apologize and make amends to that person and not blow it all off and hope that some God is going to forgive me and make it all go away. That sort of mentality is what allows people to not treat others in a way that is good.”