It was foggy out today. And when I wasn’t concentrating on photo editing, I gave a bit of attention to Lu dog, who’s been deprived of attention these last couple days. 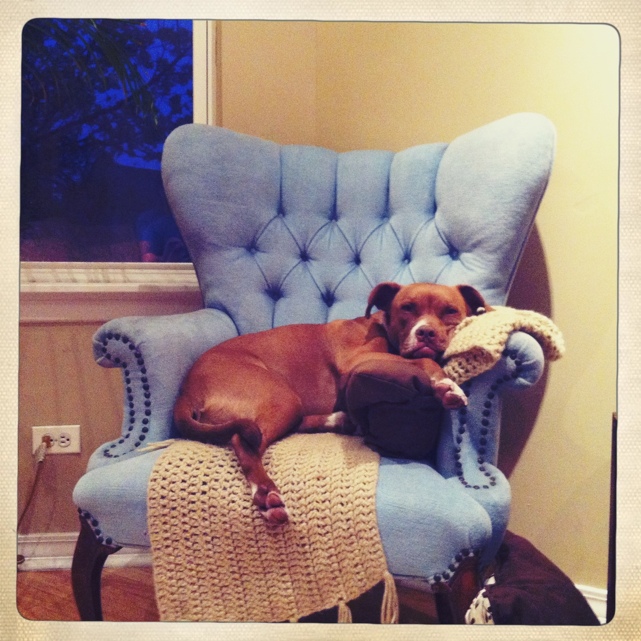 Geraldo in a Hoodie with Pants on the Ground!

“We establish no religion in this country, we command no worship, we mandate no belief, nor will we ever. Church and state are, and must remain, separate. All are free to believe or not believe, all are free to practice a faith or not, and those who believe are free, and should be free, to speak of and act on their belief. At the same time that our Constitution prohibits state establishment of religion, it protects the free exercise of all religions. And walking this fine line requires government to be strictly neutral.” —Ronald Reagan

I found this quote at Reddit, and it’s attributed to a speech dated August 23, 1984 at an ecumenical prayer breakfast in Dallas, Texas. Can anyone else confirm this?

It’s sad that comments were disabled for this video. Let the comments go. Please. If people say hurtful things, it’s their bidding. Let them comment, or don’t put yourself out there.

Last night, I watched the first 40 minutes of the movie Saved (2004) that I added to my DVR a few weeks ago.

It’s scary how accurate that show is in portraying the world from which I grew up. There are obvious embellishments.

Well, the story below is not an embellishment. I wish it were.

Up to 11 boys were castrated while in the care of the Dutch Roman Catholic church in the 1950s to rid them of homosexuality, a newspaper investigation has said.

A young man was castrated in 1956 after telling police he was being abused by priests, the newspaper reported.

The justice minister is investigating the role of the government at the time.

Last year, an inquiry found thousands of children had been sexually abused in Dutch Catholic institutions since 1945.

Dutch MPs called for an inquiry after the report was published in the NRC Handelsblad newspaper at the weekend.

Henk Hethuis, a pupil at a Catholic boarding school, was 18 when he told police in 1956 he was being abused by a Dutch monk. He was castrated on the instructions of Catholic priests, NRC Handelsblad said, and told this would “cure” him of his homosexuality.

The same happened to at least 10 of his schoolmates, the newspaper said.

Dutch Justice Minister Ivo Opstelten called the allegations “very serious and shocking” and said he would investigate the role of the Dutch government at the time.

I’m a fan of the show Southland, and usually I give a bit of a review after the season starts. But this season was different, and I didn’t want the responsibility of backing the show if it wasn’t going to live up to my expectations of the first three seasons.

The show’s finale was on this week, and now I’m bummed I didn’t promote it to you sooner. You should have watched it. It aired on TNT on Tuesdays.

In some ways the show didn’t live up to previous seasons.  I could be wrong, but the show appears to be losing some backing for actors and writers. But all in all, it was worth watching.

There were a couple episodes where they picked up transcripts straight from the show COPS and transposed them into the characters. It was overtly blatant, and I hope they paid for those rights. One of the stolen scenes was a famous COPS episode in Las Vegas in which a little person climbs a street pole and the cop starts laughing as he pulls on his hips to get him down.

One episode, every scene, was a COPS-mimicked show. It worked for me. There moments where the characters spoke to camera. They were explaining what was going on. And I enjoyed it.

Another difference this season was a sort of processing they did to some of the “film”. It’s obvious that the show uses a lot of handheld DSLR cameras. But the production team processed a saturated look into the film at points, and it bothered me. Initially, one of the points of interest for the show was it’s “natural” look.

It also appeared to me that the show used more lighting than it has before. Oftentimes in the past, actors weren’t lighted well, which sucks for actors, but creates a sense of reality that is important to sell the characters — at least on this show.

The show goes out of its way to avoid using a music track, but not all the time this season.

One plus for the season was adding Lucy Liu as a major character. They might have done it for draw, but the characters who carried over, Ben McKenzie, Regina King, Shawn Hatosy and Michael Cudlitz are something phenomenal to watch. All of those characters have made their way straight into the sweet spots of my mind, and I want them there every year, when the next, short season comes on.

The defining moment of great, action TV is a show that makes me stand up and shout. And this show delivered on several occasions. Toward the end of the season, it happened more than once within an episode.

While this wasn’t my favorite season, I’m willing to let it slide a bit. The show is great.

One of the themes that carried through the season was the difficulty it is to be a cop. It’s difficult to not get involved. There are breaking points, and the characters hit them. We, the audience, finds ourselves as torn as the characters playing the roles.

There is a gray area to life. It’s not cut and dry. And as much as anyone, not even the strongest believer, can convince anyone that black and white is the way things really are. And as much as it’s a show, letting yourself entertain the idea of being there, making those hard decisions, too, that’s the rub and the fun.

If you haven’t bought your ticket for the Southland bus, and you like COPS shows, you’re missing out.

I think this one was posted over at Pharyngula the other day. It reads, “Valley Christian Assembly: Turn your brain off. Let the spirit take over.”