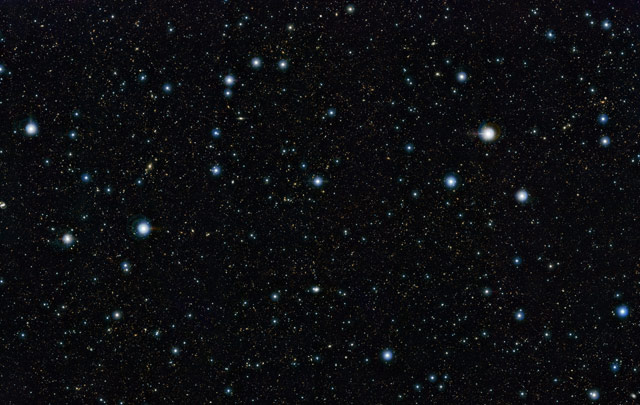 Man, I gotta get one of these VISTA telescopes from the Chileans. This thing recently took a picture of the sky that contains over 200,000 galaxies.

To put that in context, Phil Plait writes:

I’ve spent years studying all this, and it still sometimes gets to me: just how flipping BIG the Universe is! And this picture is still just a tiny piece of it: it’s 1.2 x 1.5 degrees in size, which means it’s only 0.004% of the sky! And it’s not even complete: more observations of this region are planned, allowing astronomers to see even deeper yet.

Follow that link above and get your hands on a 250 mb file of the picture for your viewing pleasure.

In all fairness, the short clip that shows Santorum bash Romney as the worst Republican candidate may not be complete.

Does that warrant the temper tantrum he throws in the clip above?

I’d like to know if the press is taking the quote out of context completely, and where I can find the transcript to make my own assessment, but apparently the journalists in the clip don’t give a shit about that.

Did I say passionate? I meant, hellbent.

Road rage in Brazil. Consider this your Monday Nooner.

Did you know that if you look west on clear nights, you can see Venus and Jupiter. Right now, Venus is straight west, shining very bright and Jupiter is beneath it shining, but not as big and bright.

I can’t help but think, that if God would have placed life on those two planets, made them in “his image”, and he would have revealed himself in the vague manner he revealed himself to humans, we’d be developing ways to shoot explosive devices at them for one religious reason or another. They’d invent ways to shoot themselves. And they’d fight over what Jesus looked like when he was born of a virgin or young woman on their planets.

Oh yeah, the above video is another edition of “Revelation Unraveled.”

Wow. Just, wow. How long has it been since I checked in on what those dirty, filthy atheist kids were posting over at reddit.com/r/atheism?

Not long enough, I tell ya.

What is this world coming to?

George Clooney says, “I don’t believe in heaven and hell. I don’t know if I believe in God. All I know is that as an individual, I won’t allow this life — the only thing I know to exist — to be wasted.” 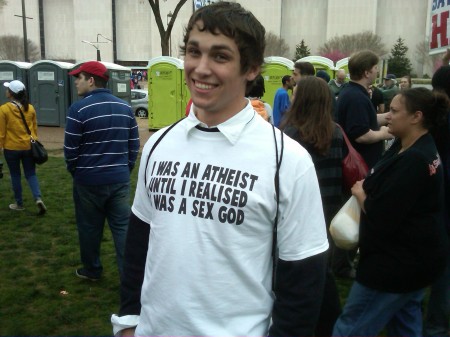 Kid at reason rally wearing a t-shirt that reads, I was an atheist until I realised I was a sex god.”

Brad Pitt says, “When I got untethered from the comfort of religion, it wasn’t a loss of faith for me, it was a discovery of self,” he says. “I had faith that I’m capable enough to handle any situation. There’s peace in understanding that I have only one life, here and now, and I’m responsible.”

Pope: “Tells mexicans not to idolize money. Sit’s on a golden fucking throne.”

Mythbuster Adam Savage says (at the Reason Rally) “I have concluded through careful empirical analysis and much thought that somebody is looking out for me, keeping track of what I think about things, forgiving me when I do less than I ought. Giving me strength to shoot for more than I think I’m capable of. I believe they know everything and I do think, and they still love me, and I’ve concluded, after careful consideration, that this person keeping score, is ME.