This Caturday Peeper Dee is brought to you by the Freethought Conference in Madison, WI.

END_OF_DOCUMENT_TOKEN_TO_BE_REPLACED

Picture of a kid on the toilet with a potty training getup reads: “I control the southern hemisphere.”

That kid is strapped in like he’s going to get electrocuted.

Via I have seen every potty training contraption on the internet 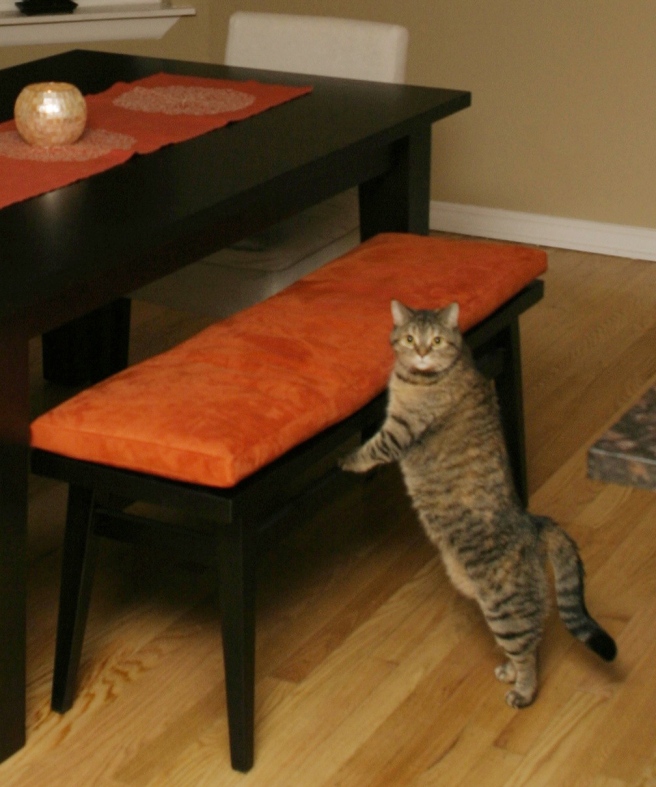 We’re reaching back into the archives on this one. Here’s Zoe, posing nude, elongating her body like a great model should.

Look and admire the ferocity of her stare.

Over at The Still Room, blogging virtuoso Becky Fifield wrote a post called, “Digging Up My Ancestors – Inbred,” part three in a series of blogs about digging up ancestors

Becky explains that inbreeding has been more common in history than you thought. And while some states outlaw certain sex acts, they continue to allow inbred marriages.

The sex acts note was mine, by the way.

Take for example this from Becky:

But when families stay generation after generation in one area out of which few people immigrate to new territories, inbreeding happens. Charles Darwin and his wife, Emma Wedgewood, are probably the most famous inbred couple. Darwin himself was among the first to scientifically investigate inbreeding, and acknowledged that marrying his first cousin could be responsible for the frequent illness and the deaths of three of their children. This is examined in this article from Bioscience by Berra, Alvarez, and Ceballos.

Coming from the south, I was all too aware of the inside joke of marrying family. Sex jokes with cousins, aunts and uncles were common.

As an adoptee who didn’t know who and where my birth family were and as someone who obsessed about meeting them, I often worried that I would inadvertently fall in love with and marry a cousin or sibling, or an aunt … or uncle!

I was taught that blood tests before marriage would prevent that from happening. But it didn’t stop the fantasy or possibility of thinking about it.

As a kid, my imagination fixated on the idea of meeting parts or all of my birth family. And while my immaturity sometimes prevented me from being able to handle knowing them, there was a strong urge just to know.

Now that I know who my birth family is, it’s hardly a big deal. The hierarchy of that family is nuts. I have cousins who are as limited in thought as rocks with graffiti on them.

I’m surprised my birth mom still claims to be a Christian after all these years of putting up with her family’s patriarchal, religious extremist, bullshit-believing family. When I talk to her, she is so liberal and free-minded one second. But I can figuratively hear the cogs come to a halt when she backs off and talks about religion and Jesus during phone conversations. These phone conversations are infrequent, yearly at best. But I’ve given them much thought.

Let me put it this way, imagine having a big piece of bubble gum in your mouth. You take a chunk of it and pull it away from your lips. No matter how far you go with it, it stays connected. That’s the way I see my birth mother, her family and religion. No matter how hard or far she goes to get away from that awful, short-sighted mindset of conservative, religious thought, she’ll always get snapped back into it.

Even though you can be happy as a separate piece of bubble gum and you can still go back in the mouth once in a while, setting yourself free of that sticky ideology is too freaking hard.

This is the Yeshua Fog™, and it does not let go easily.

Are you bound by the Yeshua Fog? Are you the piece of bubble gum who is incapable of becoming unstuck because of familial pressure?

We’re here for you. At least I say I am. Come on over and talk a while.

Last night, I reached out to regular-reading Biodork and asked if she fell off the planet, which is quite easy on a flat earth that we all know we live on.

She was consistently emailing Peeper Dee’s and then it stopped.

And if you’re like me, you felt the air get sucked out of Le Café almost immediately.

But Biodork’s been busily proselytizing freethought like a good atheist missionary.

In her response, she wrote that she gave a heavily researched talk to a group of atheists at the University of Minnesota on Thursday night. She wrote:

I was speaking about atheism and blogging, and I mentioned Le Cafe several times as an example of a great mix of personal, professional, thoughtful atheist writings and poop jokes.

I told you I wasn’t crazy.

She also reminded me that there’s a Freethought Festival in Madison, WI this weekend. I didn’t put the damn thing on my calendar, but I posted it here. I’m so lame.

I’m booked up today, but maybe I can get up there tomorrow and sell some Le Café Witteveen T-shirts (that don’t exist).

I mean, you know how gullible skeptics are. If they accept the Big Bang and evolution — what with its mountains and mountains of evidence — those fuckers will accept anything.

Anybody who thinks Jesus’ torture, death and resurrection makes up for the flaw of centuries old disobedience deserves to post this on facebook without an ounce of remorse or irony.