Seen at The Friendly Atheist

I hope I didn’t screw up your love for submitting Peeper Dees.

I shot the two cuties (above) while visiting the monkey sanctuary in Ubud, Indonesia.

Gosh, apart from the cigarette, clothes and camera, there are very few differences between the two critters.

Well, I bet the guy on the left has bigger balls.

But, monkeys are known to enjoy a few too many bowls of yogurt.

And you started doubting evolution. Are you kidding me?

This morning, Tina and I set our alarms for 5:15 a.m., roughly 12 hours earlier than we usually get up and start our days.

We photographed a breakfast event, and had to be on site by 6:45. We were in bed by 10-ish, reading and sipping night-time tea. By 10:45, my light was out, but neither of us could sleep for anything.

Our shoot was a new client, but I wasn’t stressed out. Or so I thought. Between the stress that crept in my mind, giving me weird, unbearable dreams that felt like I was awake and thunderstorms throughout the night, it made for a few hours in bed that felt like a marathon.

In one of my dreams, all of you were there. And we were running from the bad guys. But we were all naked. And it appeared that many of you guys need to lay off the yogurt.

At one point during the night, there was a clap of thunder that resembled applause. It seemed to never end. It was that fart that you let go after holding it on a first date or with a new group of friends. By the time it comes out, you could say the alphabet forwards and backwards at least twice before your sphincter stops flapping.

That thunder scared the shit out of me.

It reminded me of growing up. My room was directly across from my parents’ bedroom. Sometimes at night, you’d hear the loudest, longest gas explosion coming straight from their room.

“Dad!” I would yell making one syllable several.

“That was your mom,” a voice would say.

Laughter would emit from my brother and sister’s rooms, too.

It was the equivalent of our Walton’s moment.

Today’s job was one that required a same-day turnaround, so we got home, and in the most productive way possible, went through the images, culling the bad and improving the good.

When I feel sleep deprived, it feels like my brain is pushing up against my forehead. It’s not so much of a headache as a pressure. And that pressure is irritating.

If you’re un-American, too young, your parents abused you, or you just want to relive a great TV moment, here’s the redundant ending to the TV show, The Walton’s.

Scientists –in labs and lab coats — have determined that eating yogurt can increase the size of a male’s balls … at least in mice.

I wonder what it does to men?

It also made the mice shinier than their non-yogurt eating, small-balled compatriots.

So the next time you’re in the locker room, and you notice the guy next to you has balls that hit the floor, tell him to lay off the yogurt.

Check out this monstrous, murderous-looking fish called a sarcastic fringehead.

This little teeth-heavy, scary looking, cobra like thing gets its name from the original meaning of sarcastic, which is Greek for “to tear flesh.”

The next time I go ballistic on some weird commenter troll, you can say I went sarcastic fringehead on his ass. 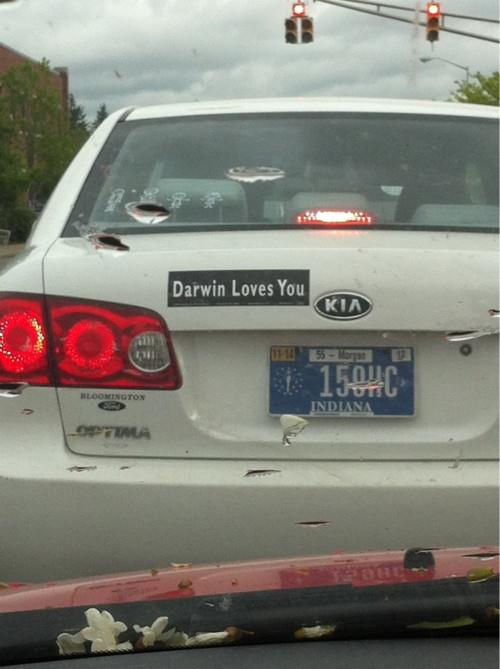 I’m thinking Darwin loves you just as much as anybody who’s dead.