What paint me excited and stroke my thingamabob, PT Anderson’s newest movie is on the horizon (finally!).

Written and directed by Academy Award nominee Paul Thomas Anderson (the acclaimed director of, There Will Be Blood, Magnolia and Boogie Nights), this story stars Academy Award winner Philip Seymour Hoffman (Capote) and Academy Award-nominee Joaquin Phoenix (Walk the Line). Set in America in the years following World War II, a charismatic intellectual (Hoffman) launches a faith-based organization and taps a young drifter (Phoenix) as his right-hand man. But as the faith begins to gain a fervent following, the onetime vagabond finds himself questioning the belief system he has embraced, and his mentor. A truly one-of-a-kind drama, which promises magnetic virtuoso performances, the film marks the fifth collaboration between Anderson and Hoffman, following Hard Eight, Boogie Nights, Magnolia, and Punch Drunk Love. 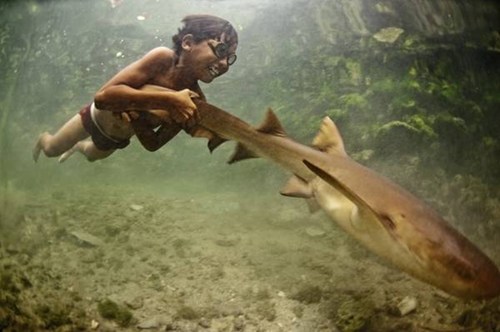 I found this over at The Daily What who writes:

Enal, a young sea nomad, rides on the tail of a tawny nurse shark, in Sulawesi, Indonesia. Marine nomadism has almost completely disappeared in South East Asia as a result of severe marine degradation. I believe children such as Enal have stories that could prove pivotal in contemporary marine conservation.

Just… wow. Our money’s on Morgan for the win.

Bryan Fischer and AFA’s Randy Sharp discuss a prophetic word from God that was delivered to Home Depot at a recent board meeting.

Pastor Charles L. Worley of Providence Road Baptist Church — located at 3283 Providence Mill Rd, Maiden, NC 28650 — is seen here from a service posted to the church’s website dated May 13, 2012 calling for the starvation and ultimate death of “queers and homosexuals.”

We all love Devin Super Tramp’s videos. Here’s a new one for your viewing pleasure.

Tuesday wouldn’t be complete without a quick tip on cooking bacon from America’s test kitchen.

Image of two girls posing in front of what appears to be a forest fire reads, “Forest fire LOL ~*~ text it  ~*~”

The movie Idiocracy is phrophecy. You didn’t hear it here first. But you heard it validated here at least a zillion times.