Those clueless, moronic dim bulbs over at reddit.com/r/atheism are still posting offensive and derogatory “jokes” and “meme” type things. How dare they! Let’s take a look at a cross section of their evil ways.

Jesus Christ! From a Dark skinned, peace loving, middle eastern jew to a white, racist American Capitalist who looks like the maintenance man at a Birmingham trailer park. Please pardon my skepticism.

The directionality of scientific discoveries.

Reason is a virtue. Midohioatheists.org

“Believed that homosexuality is deadly. Died after being bitten by a rattlesnake during a pentecostal snake-handling ritual. … 30 years after watching his father die the same way.

It’s irrelevant whether Obama is a Christian or a Muslim as long as he governs like he’s neither.

Many of you know, I shot the Red Hot Chili Peppers in concert on Monday night. You can see more of the photos at Time Out Chicago.

It was my first big band, big arena concert. Driving to Allstate Arena, I called regular-reader Aaron, and nervously left him a message explaining how excited I was despite my hands shaking from fear slash happiness. He called me right back and shared his excitement for me.

Before I shot, I had to sign off a release saying I wouldn’t sell the photos or use them for merchandising. Using them on my web site seemed iffy, but I can link to my shots on Time Out and say, go check them.

When you shoot a band, you only get the first three songs. You’re not guaranteed a ticket to the show, either. So after the first three, they sent me home.

When I arrived at the arena, I had to hunt for Will Call. When I found it, they sent me straight to the loading docks. I explained to a doorman who I was, and he sent me to a sign-in table.

After signing in and getting a pass, a security person escorted the photographers who were there to the stage where we could shoot the first three songs of the opening act, called Little Dragon.

Their lighting was really dark. The mixed colors made it difficult, but doable. I’ve seen that lighting before in smaller venues.

After three songs, security rushes you out and we had to wait an hour in a holding area before shooting RHCP.

Since Mother’s Milk, I’ve been a HUGE fan. When I was learning bass, I listened frequently to everything Flea did.

Since then, I stuck by them as a band, even on the albums that weren’t critically acclaimed, which is, like, most of them since Blood Sex Sugar Magic.

But they brought it to the stage. Between being so close to long-time idols, the adrenaline rush of trying to “get the shots” and really enjoying the music, I was having screaming behind my lens having a great time.

Since Monday night, I saw that other photographers already posted to their personal blogs. I still don’t know if I should or not, and the fact that I have a couple images with links to Time Out on my pro blog, I still wonder if RHCP is going to hunt me down and take my dog for ransom. Here’s one guy’s images who shot with me.

At this site, Atlanta photographer Allan Ross posted photos and reviewed his experience from a different show last week. He recommended how to shoot the band, including camera settings, and who he’d shoot first to last. He said to start with Flea, move to Chad Smith, do Anthony and end on the new guitarist. That’s what I did.

I agreed with everything, but the camera settings, especially the shutter speed. It was harder to shoot than Mixed Martial Arts, which required fast shutter speeds to stop the punches and kicks. During the concert, I was getting motion blur on Flea’s head at shutter speeds of 1/400 to 1/250. I knew that I would get that, actually, and I was cranking it as far as 1/1000 to stop Flea’s head and the drummer’s sticks.

Tonight, I’m shooting The Cult and Against Me, which I’m excited about. I only agreed to shoot it, because my photos will publish over at Time Out, and I can always link to the shots to show people. But I signed away usage completely on this one, which I think is a complete mistake.

I talked to my editor about it, and I told her about people in the crowd with nice cameras. She said they’re not as nice as mine. But some of them were as nice as some of the photographers in the pit. Regardless, I think it’s shitty. This guy thinks it’s shitty, too, and he refused to shoot the concert because of it.

Apparently there’s a controversy surrounding Against me. The lead singer has gone from being a front man to front woman. Tom Gabel is now known as Laura Jane Grace. My editor and some friends have questioned whether the crowd is going to boo and turn on them.

It’s exciting to have these bylines in publications. If you asked me 10 years ago if I saw myself where I am, I don’t think I would have ever predicted it. I’m having a blast, and it feels good and validating to have this kind of work.

It makes me excited to see what will come next. 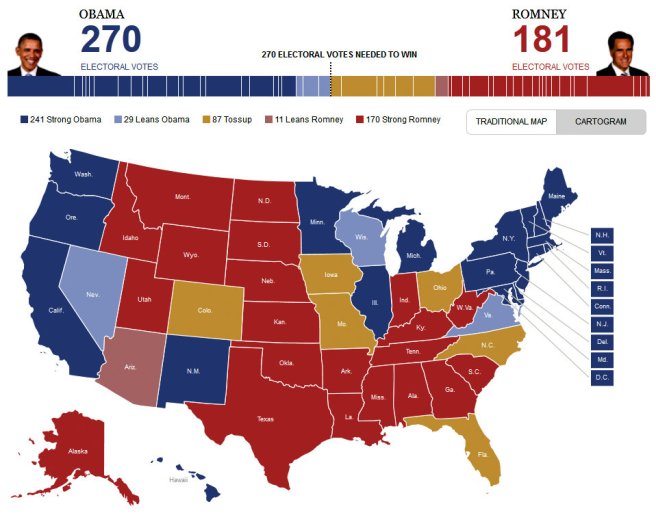 It’s Friday. And there’s no better day than Friday for two things: Sex, as referenced in the previous post. And Politics, as it’s not sex, not enjoyable, and it’s downright a pain in the ass.

The above chart shows that Obama’s ratings are dropping. Study it. Learn it. Fixate on the colors and be mesmerized.

In other news, check out Romney’s record on job creation and taxes as cited by his former opponents:

These items were seen at JMG 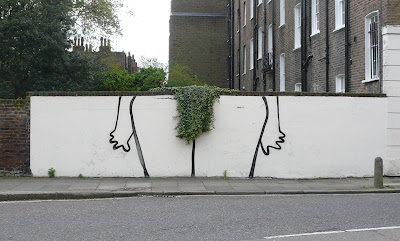 You may have seen this art installation attributed to Banksy, and that the hedges were pruned to be less unruly. See below.

The way trends are, you’d think Banksy would do this with no vine at all.

Or maybe a landing strip.

Or how about a valentine.

Here’s to your Friday becoming more of a Hump Day. 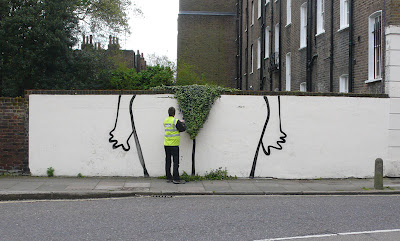 Seen across the internet but reseen at TYWKIWDBI