Yesterday I picked up our car from the mechanic and stopped at the grocery store to pickup a few groceries.

When I pulled up to the grocery store, a story about my favorite guy David Barton was on.

David Barton is the guy I would have become if I continued on the trajectory that I was on as a senior in high school. He’s an activist posing as a “historian” and he uses botched and misleading information and rhetoric to steer otherwise good people into thinking the history of the world and especially the United States is quite different than what most everyone learns in classrooms.

David Barton says things that I was taught at Wesleyan Christian Academy in a class called “Understanding the Times,” which was a curriculum based on biblical revisionism.

When I left Wesleyan, I was gung-ho for the LORD. And I repeated stuff teachers taught me in so many situations. I was the cat’s pajamas. I thought I was smarter than everyone, because I was armed with logic laced in Jesus’s own awesome word.

I was a warrior for Christ, and, frankly, I felt welcome, inspired and confident as that person.

When I took the “facts” learned from these courses into the classrooms at a private Presbyterian college, it was made clear that stuff I was repeating was not factual. It was frustrating when I would raise my hand in class and the teachers looked at me like I had three heads and penises for eyelids.

These were Christians. How could they disagree with me?

Researched further, the smallest bits of information I learned in those high school classes were lies, which lead me to wonder if everything I was taught were lies.

When I was growing up, my mom put a spank-load of influence on telling the truth. And I mean telling the truth to the T. If the slightest bit of information was off, my mom — or the end of a .5″ thick paddle let me and my deceitful ass know.

So when further research lead me to uncover the truths of those classes, I became more and more angry.

David Barton and the classes that are still being taught at my old high school make people stupider.

And they don’t care.

Barton, I believe, is a version of the old me, but no one helped him see that he’s just a cocky asshole with a shitload of bad information.

And who would do that now? He’s making a killing off his direction in life.

And that’s all that matter.

Yank my suckling mouth from a teat of flowing cash, and I would grow corrupt to get my mouth back on it, too.

Well, the story on NPR is here. I listened to the damn thing twice, just in case I missed something.

I highly recommend listening to it.

And I imagine because some of my readers are anti-NPR, they won’t. But there is for and against in this liberal story. I felt it was a bit balanced as I don’t like the writer much ( BARBARA BRADLEY HAGERTY) because she kowtow to woo on her segments.

The good news is Barton’s publishers listened to the report and they have done their own research and they’re pulling the book off the shelves.

Mind you. This is not a book with low sales.

This is a book that has made many high sales lists.

So if a greedy old book publisher — in this piss-poor economy — is pulling Barton’s books … you know something smells shit-ass rotten in Denmark.

I say it’s too late. Barton isn’t to be stopped. And if I were a praying man, I’d pray that Barton would become enlightened to his deceitful bullshit.

But we know that doesn’t work.

Zondervon will get behind that rag of crap and private school teachers without a shred of respect for erudition will put that in the hands of their stupid little students.

And we’ll all suffer for it later.

Image of dude in coat and white slacks reads, “Sisyphus was a goddamned pussy.” 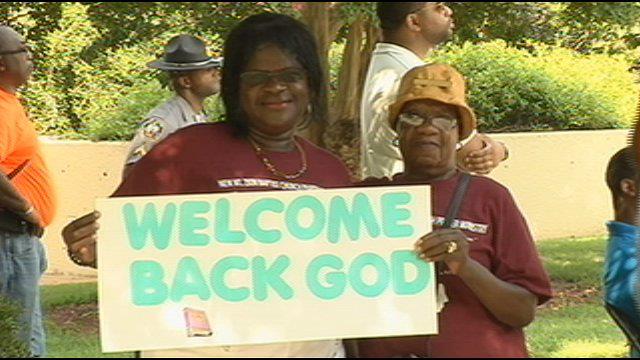 I saw this image of two women holding a sign that reads, “Welcome back God” and I had to snicker a bit.

Whenever there’s talk of “taking God out of schools” and stuff like the above, I wonder if believers really believe the ideas they claim are 100% true, 99% of the time.

I had to redirect your attention to Stan’s blog TYWKIWDBI who posted the above picture.

Above, check out: George Speake – a travelling “preacher-scientist”.

And below, check out An “extremely rare anti-masturbation device”.

“I didn’t quite realize,” says Pope Mohammed sitting on a bench yanking on a shoelace of his Nike Airs. You are standing at a locker, twisting the knob to your combination. The echo-y sounds of showers can be heard. A stranger walks past holding a toiletry bag wearing only towel.

“I didn’t quite realize,” repeats Pope Mohammed. “… just how little mine was until I saw yours.”

You pause. You look down at the towel you just covered yourself in after taking off sweaty shorts. You look back up at the locker. Your face cringes.

You have to restart your combination from the beginning.

Out of your peripheral vision, you can see an older man facing away from you, stark naked. He is powdering his legs and genitals with baby powder. His scrotum bangs between his legs as he reaches around rubbing the powder in.

Another man weighs himself on a nearby scale holding a towel closed around his waist with one hand. Within a glimpse, you notice a tattoo in the middle of his lower back. “A man with a tramp stamp,” you think. “Huh.”

You look down at Pope Mohammed who is holding his shoes like two fish with their mouths wide open as he slides them into a duffel bag.

“Compared to mine,” starts Pope Mohammed. Your eyes open wide wondering what’s coming next. He clears his throat.

“Compared to mine, your gym bag is enormous.”

Pope Mohammed is a short story series that I’ve been working on for some time. More here.