“I don’t believe in evolution any more than I believe in gravity. It’s a fact.”

Remember that photo I wanted you guys to look at and let me know what you thought?

Well, it was for an advertisement that we’re putting in a magazine.

We ended up going with another idea designed by my friend Ryan.

Check it out at our pro site here.

This weekend is one of the busiest we’ve had in a long time.

I shot a wedding on Friday, one yesterday, a runway last night and this morning another runway and then a tradeshow. Tonight I am photographing Ben Folds Five at Chicago theater.

Ben Folds is actually from my neck of the woods, which is always cool.

Once, circa 1999, I drove up to Michigan from North Carolina with my brother for some kind of family reunion or funeral. Along the way, he pulled out a CD and said, “You gotta listen to this band we opened up for last week.” It was the first album from Ben Folds Five, and we probably listened to it five times on the way up.

I’ve seen them live a couple times, but it’ll be cool to actually photograph them.

We have some time this afternoon that I will show up around here, so check back really often. 🙂

END_OF_DOCUMENT_TOKEN_TO_BE_REPLACED

Yesterday, I agreed to help shoot a wedding in St. Charles, which is a westerly suburb of  Chicago.

The wedding was at St. John Neumann’s Catholic Church. I’ll get to the church a little further into my story, but St. John Neumann is hands-down the worst, most uninviting, unpleasant church I’ve ever photographed a wedding.

Between video and photography, I’ve shot weddings since 1998. After shooting so many weddings, you get a chance to see what works and what doesn’t. Every church and every priest or pastor has their own set of rules. St. John’s is in a league of their own.

END_OF_DOCUMENT_TOKEN_TO_BE_REPLACED

If you talk to any warm-blooded, well-read believer, there are no discrepancies, errors or contradictions in the bible. They just aren’t there. If you see them, it’s because you’re reading it wrong. “Demons” or disease? It’s just a matter of context. Whales swallowing humans for three days and throwing them up in tact, unharmed (for the most part), you need to read it in context of whales used to have less strength in their digestive juices. Supernatural strength that is based on the length of a man’s hair, hair used to have super powers for a minuscule percentage of the population.

What are you, stupid?

Rarely is the world graced by a woman so heavenly, beautiful, loving, brilliant and moving as Ann Coulter.

Her visit to The View should be heralded as the ultimate reflection of the splendor that is she.

And by heavenly, I mean she reflects the image of God.

She’s got her fans fooled to think she’s the bee’s knees, while she’s easily the most evil, cunning jerk to exist in any imagined state.

She’s full of herself and full of shit.

The epitome of deity.

I’m going to ask her into my heart. 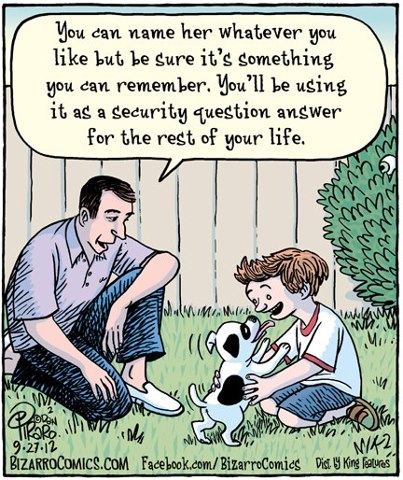 Bizzarro Comic of father talking to son with a new puppy reads, “You can name her whatever you like but be sure it’s something you can remember. You’ll be using it as a security question answer for the rest of your life.”

This Peeper is a Thundering Thursday special. I’m not sure I saw yours in the mix.

Where are your submissions!