We’re moments away from the war on Thanks-Christmas.

You should prepare yourselves … by submitting more PPDs.

END_OF_DOCUMENT_TOKEN_TO_BE_REPLACED

Brilliance, thy name is not Bill O’Reilly.

We’re thinking of selling out and making Talulah one of those daily dose kind of dogs that gets huge virility and makes us zillions of dollars on the Internets.

What would you caption this shot?

Damn, man. I got myself worked up.

I thought for sure Romney was going to take it. And today would be a day of, “Oh well, we fought a good fight. Let’s move forward.”

I had no faith in Nate Silver or his prObama predictions.

I had no faith in America’s ability to choose wisely.

I was willing to ride the Bronco Bama, but with some hesitation.

I second, third, fourth, fifth and sixth guessed the advice I received from our accountant, our insurance representative(s), and financial planners who recommended Obama over Romney.

I second guessed the Economist and Bloomberg.

I predicted that I would concede to my family and friends who supported Romney. Who prayed diligently for his victory.

I predicted early on that Paul Ryan would be the death of Romney, as well. But the advice that he must have taken was “don’t go rogue … for the sake of the election.”

SNL couldn’t find any good and decent caricatures to make fun of. Ryan stayed out of the limelight, and essentially stayed away from the folks that would make fun of him.

Romney was pretty much immune to really good jokes.

If you’re on Facebook, you’ve probably seen a range of apocalyptic messaging. I have one aunt who accepts government help and has the nerve to update with things like, “OK where can i get my free phone and all the other free stuff!!!!!!”.

I didn’t know Honey Boo Boo was on the docket for cancellations. I would definitely consider electing Romney if that were an option.

“I’m literally in tears. I’m officially terrified of what may come of this country and — even more so –what’s in store for my children. America is not “the land of the free and the home the brave.” So sad.”

The responses range from, “Obviously it is the land of the free if people were allowed to vote. ;p” to “Oh its free all right, as long as you’re not a citizen.”

Of course, we’ll get to see how Obama destroys his dissenters like WND and FOX News. It’s not funny, but he could totally send some drones over their headquarters and blow them to smithereens.

When was the last time you used that in a sentence?

But here we are on November 7. Most of us woke up this morning. Most of us are still in tact. Most of us voted (by a slim margin) voted for Obama.

I don’t believe that I would pull my hair and write this country is going to hell in a handbasket.

I don’t believe that I would send hate notes up to Romney and Ryan, and degrade his followers.

Or maybe I would. Or maybe what I wrote would be interpreted that way.

Let’s give it up for the women!

I’m excited for the wins for women in this election. I have a huge geek crush on Elizabeth Warren. She won!

And in my hometown of High Point, NC, a black woman named Bernita Sims won for mayor.

With liberal leadership, we can hope that we make more headway for our future with continuation of equaling pay, giving them more control over their health and bodies, and giving men (white men) less power over them.

And Finally the Tea Party and the Evangelical Right.

I hope my readers are open-minded enough to see this election appropriately. Accurately. The Tea Party and the Evangelical Right, with their hope to impose their views on social issues is hurting the Republican Party.

Last night, as Tina and I watched that train wreck known as election coverage, we talked about how there were elements of Romney we liked. I know! Blasphemy!

We thought, there could have been more of an appeal to him with a few adjustments. There was definitely a draw to his business sense. Primarily, it was his associations to social issues, that he did his best to distance himself from in the last days.

The fact that Romney needed to appeal to hard-right conservatives and slowly edge toward the center hurt your chances for the presidential seat.

They removed Mormonism as a cult from their website to support a guy who never gave up the inside information on his plan to “fix” the economy.

They did it to get a Republican in the White House.

The right prayed and prayed to their almighty God, and the winner isn’t what they hoped for. Again.

To evangelicals, God said, “No.”

To many, the response has been that America is asking for god’s wrath and anger to seek revenge on this nation and its people. You know, god is going to send more natural disasters and stuff.

If you believe such things, consider (for just a moment) that you believe what you say. You believe that God is in control, complete control, and maybe … just maybe … he is directing this election, this country, and this Earth toward a progressive ideal.

Consider that God, like the story of Job, allowed this to happen. Because he has a plan.

But if you’re like me, and you don’t believe God had anything to do with it, thank goodness that 50.3% of this nation think Obama is worth it.

Our secular prayers, hopes and ideas have eeked out a victory.

But we are going to suffer … All of us!

What sucks is that we will suffer over the next four years. Conservatives will suffer because they think our leadership is awful.

Liberals will suffer because SNL, The Daily Show and Colbert Report are going to come up short for decent material.

How are we going to entertain ourselves over the next four years!

That’s what I want to know.

And thank goodness for the New Black Panthers and their ability to sway voters from voting: 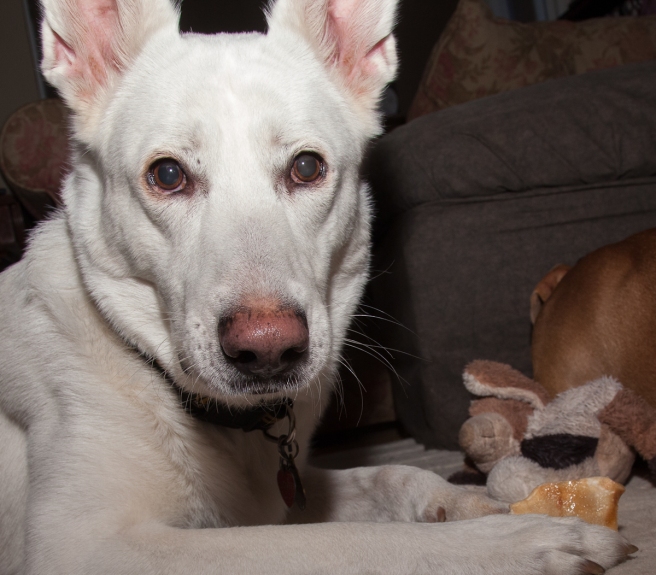 This very special, day-after-election Wednesdog is brought to you by adopted German Shepherd Scarlett.

I’ve posted Scarlett before, but only used one T to spell her name.

Scarlett is my neighbor’s dog whom we dogsat for a couple days at the beginning of October. Scarlett has had a troubled life so far. Our neighbor has needed to work with a behavior specialist.

We’ve decided that a lot of the issues stem around loud noises and metal monsters like bikes, cars, etc. Unfortunately, we have a crapload of that here in the city.

But when our neighbor takes Scarlett to the country, well, the stress is alleviated, and Scarlett behaves like a happy-go-lucky dog.

In the shots above and below, Scarlett was enjoying time with her BFF Talulah. Being in a pack seemed to be good for Scarlett.

But you can tell that at a moment’s notice, Scarlett could have a nervous breakdown.

We’ll see how Scarlett progresses over the years, because eventually she’ll need to acclimate to the city. 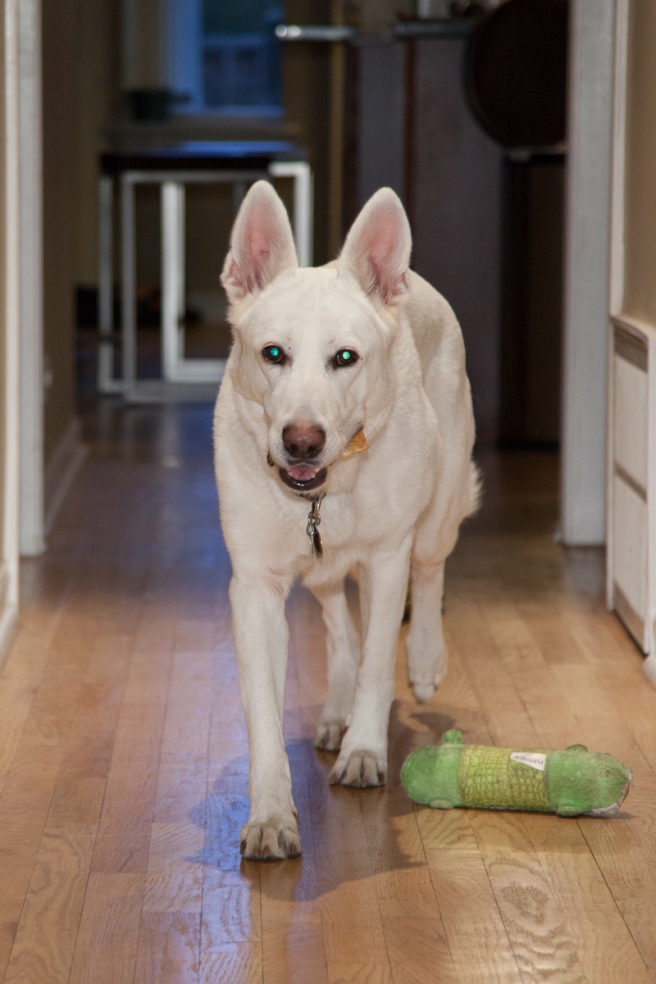 The “She-Pee” is a women’s standup urinal that is coming to that festival near you.

And look how fun it is to use. And take pictures of its users.

Seen at TYWKIWDBI where you can read more.