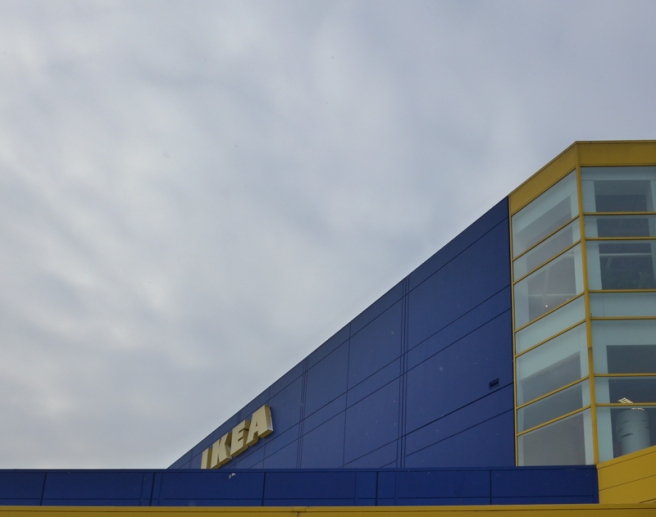 The below article was published over five years ago. It’s old. It’s been linked to for years  and responses have been hilariously pathetic, angry, bored, antagonistic. As if Ikea is a church and it cannot be shit upon as if it would be blasphemous. The truth is: IKEA is a great resource for inexpensive furniture and interior design needs. I’ve stayed in beautiful apartments all over the world decorated with IKEA furniture. That doesn’t make it the best quality. It just means the budget was limited and a good resource was used. If you love IKEA, you won’t like this response, so MOVE ON! But do yourselves a favor, consider a luxury brand for investing into the future. It’ll serve you far better in the long run!

Yesterday, Tina and I ventured out to the Schaumburg area to do corporate head shots.

Schaumburg is a near-Chicago suburb that features such amazing attractions as:

And just like hell, IKEA is where all people are attracted to, because it’s fun to be bad, but that hellish IKEA sucks the life out of you and you may never leave once you enter. It’s never ending. And it’s a Bermuda Triangle of exit signs with no exits.

Tina and I have been discussing remodeling my home office, which is our second bedroom at our two bedroom condo here in Uptown, Chicago. We’d like to do it on a budget, so IKEA could be a decent solution.

Tina’s idea was to use IKEA as the solution for the things we’d like to add to the space, namely some kind of pullout couch, so that guests don’t have to sleep on an air mattress when they visit, and also make the room a little more comfortable when she works with me. When Tina works with me, she pulls a chair or two from our dining room, and she always complains that it kills her back. 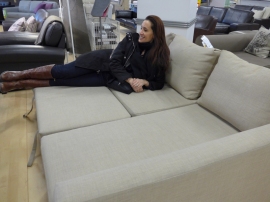 Recently, Tina visited IKEA and found a sleeper sofa couch thing, named Friheten, corner sofa bed with chaise. On first glance, the Friheten seems like a good solution. It’s somewhat comfortable. It would fit in my office. It turns into a comfortable looking bed.

But after a third look, the bed would be perfect for one person, but a big pain in the ass for two. If two guests slept on it, one person would be forced to schooch out, shimmy maybe, off the foot of the bed, should they need to pee in the middle of the night.

IKEA Products are THE Shit.

Not to mention, the couch is IKEA. And after a year, the chaise arm will be lying off the side of the couch. The pillows will be ripped open and stuffing falling out. In two years, the thing will be a pile of saw dust and nails, which is somewhat less comfortable than Tina sitting on our dining room chairs.

IKEA products are a ticking time bomb of worthlessness that falls apart minute by minute.

My parents instilled in me many disciplines and an amazing education. My dad worked as a furniture designer and has been in the furniture industry his entire career. If anything, IKEA is the exact antithesis of quality, and my dad instilled that in me. When I walk through a place like IKEA, and I touch the furniture, open a cupboard or close a drawer, I get nausea like Alex in the final scenes of A Clockwork Orange.

At one point, we passed two IKEA employees setting up a vignette area, and I noticed how much trouble they were having with a shelf. “The irony,” I thought. Even the employees struggle to put IKEA shit together.

And that’s what it is. Shit.

When we arrived in the IKEA parking lot, we headed to the food area to grab a bite. You can’t shop IKEA with an empty stomach. While we waited for Tina’s panini to toast, a creepy old man hit on Tina until I walked over with my oversized tray with a plated chicken wrap on top. He explained to her that this was the third time he’d been to IKEA in two weeks.

He laughed and said, “Yes.”

We sat our tray down on a table near another table with an elderly couple. The woman was wearing a faded pink, one-peice, snow suit with a purple nit hat. Tina and I rolled our eyes. After stomaching a the nastiest chicken wrap ever and Tina’s order of a panini, we cruised off onto the floor to SHOP!

The food court is on floor three, so we descended to two to find the couch we were looking for. We walked all of floor two, which didn’t include the items we were shopping for. Tina recently went to another IKEA which was setup a bit differently. So we escalated back up to floor 3. We found the couch and kicked its tires a little. Laid on it. Took some selfies.

I brought up my concern about sleeper number two getting the shaft. The bed was great for one person.

So off we went looking for a legitimate sleeper sofa. We found one, but it wasn’t setup, so we couldn’t test it fully. “Why wouldn’t IKEA setup the ONLY sofa bed on the floor?” I asked.

Then I remembered that it’s IKEA, and the army-sized manpower and resources are likely not available for the Sisyphean task of setting up something like a sofa bed.

When we arrived at IKEA, as I was turning the key ignition to the off position, I told Tina, “You’ve only got an hour in here, and then we’re leaving.”

Tina check her watch, “That’s not a long time. We have to eat, too.”

“Then I suggest we get moving,” I said.

At around the one hour and fifteen minute mark, clearly past anyone’s time limit for spending time at IKEA, we were looking for the exit. You see, everyone has their IKEA limit, and mine is less than 5 minutes. Some people push longer. But EVERYONE has their IKEA limit.

There are many exit signs, but they are for emergency use. To actually get out, you need a compass, dropped bread crumbs, a drug sniffing dog, CIA-level clearance for information acquisition, and a hacked GPS to get past the patented IKEA GPS blocking technology.

Finally, I saw a glimmer of what appeared to be a path toward the escalators. But we had to pass through a small opening between the frames department and a kids accessories department. Tina led the way, only to be blocked by a woman with a child sitting in a shopping cart.

Tina approached with purpose and determination. “Excuse me, ma’am,” she said as she slowed to not hit her.

Tina had to stop. The woman surely heard her.

“EXCUSE ME, MA’AM!” Tina said as if the wait were a thousand hours and the woman was a slug.

The woman finally moved, pushing her cart clear enough for us to pass.

Tina clearly pissed the woman off, a woman who had clearly passed her IKEA limit, too, and as we were about 10 feet, I happened to look back to see the woman start opening her mouth to damn Tina. “Lady, you didn’t have to be so RUDE!!!” She called out.

Tina, amped up IKEA-induced adrenaline, shouted back, “I had to ask you TWO times to move out of the way!!!”

The other woman started to scream something in response and I said, “Nope! Nope! Just leave it alone! Don’t even worry about it. This is IKEA! This is IKEA!!!” It was as if to say, you are both possessed by demons and I am the only Jesus here strong enough to dispel the demons that have taken control of your tongues. Leave each other be. You were both possessed!

This Story is longer than Homer’s Odyssey!

You and I both want this story to end, but it didn’t.

Tina’s possession took control one more time and she decided she wanted to buy something at IKEA, so she chose a $0.99 hazelnut candy bar. We went to one line, and the cashier said, “This is a debit card only line, ma’am.”

“Yes,” I said, “Thanks.” I clearly had not heard what he said, just that he said something.

“This is a debit card only line,” he repeated.

“Yeah, yeah,” I shushed him with a wave of my hand.

“THIS is a debit card only line,” he said yet again.

A wave of IKEA-drenched confusion flushed from my brain. “Ohhhhhhhh … this is a debit card only line.”

So we had to go to the one fucking line that accepted cash … the longest line … for a $0.99 candy bar … at fucking IKEA.

While Tina waited in line, I noticed a grocery area and tried snapping a photo of two Zombie women conflated by a $10 bag of Swedish meatballs. Clearly, they were brainless, otherwise they wouldn’t be buying frozen meatballs from a goddamn “furniture” place.

We drove away, and as we drove, I noticed the temperature drop on our on-dashboard thermometer.

Says me as we sped away, “Clearly, IKEA is hell. It’s getting colder as we drive away.” 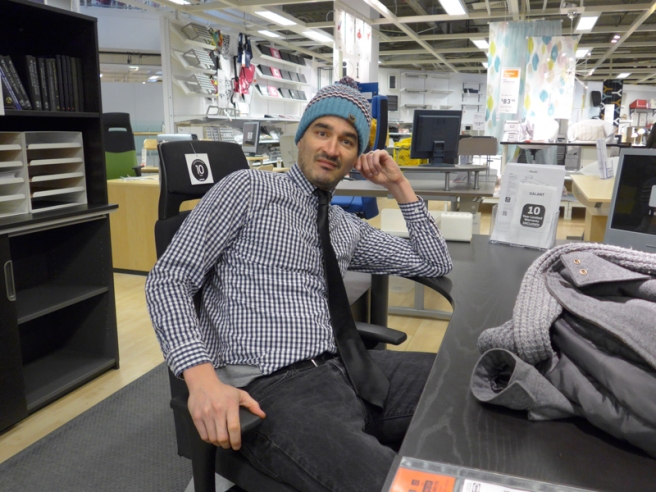 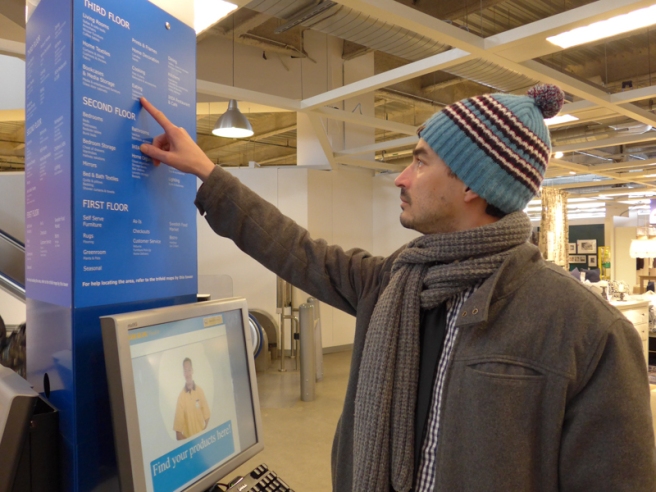 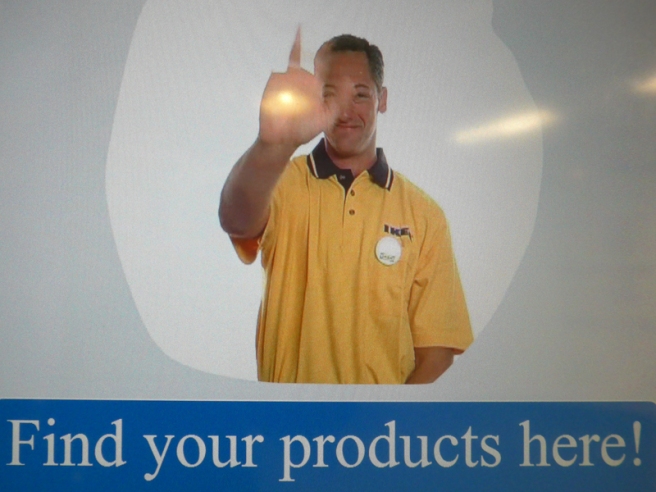 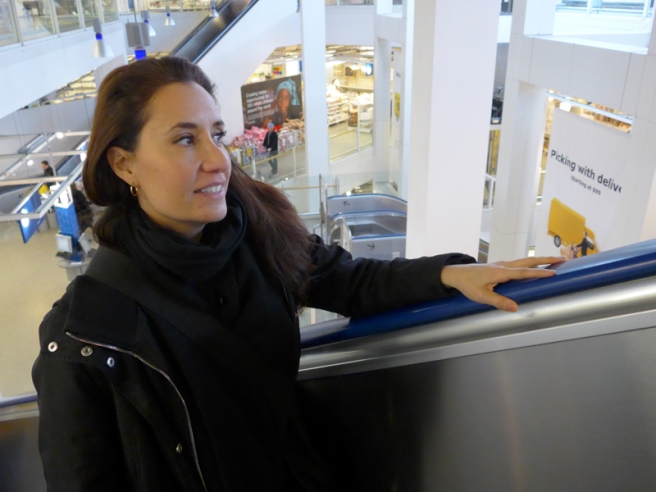 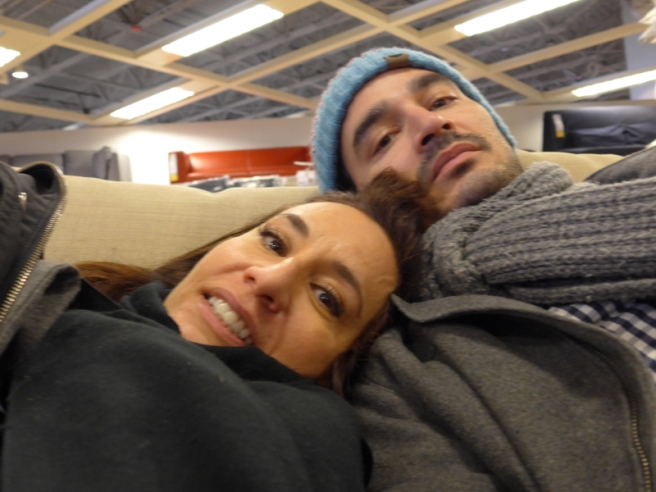 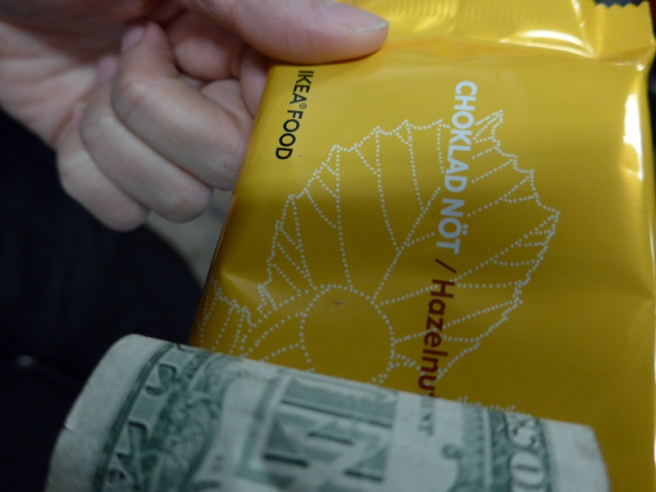 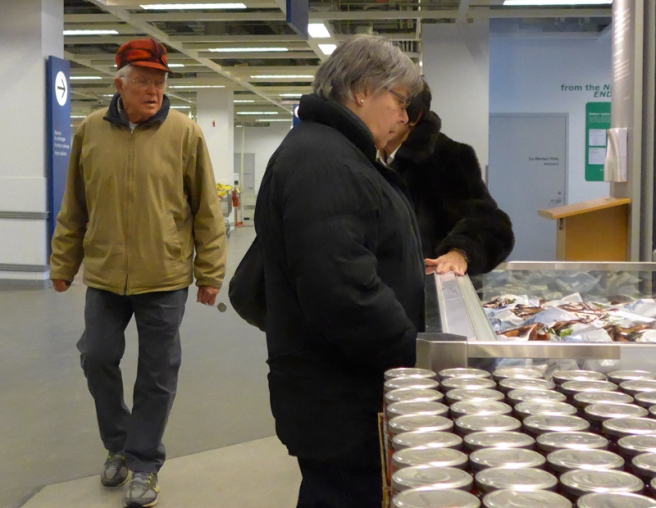 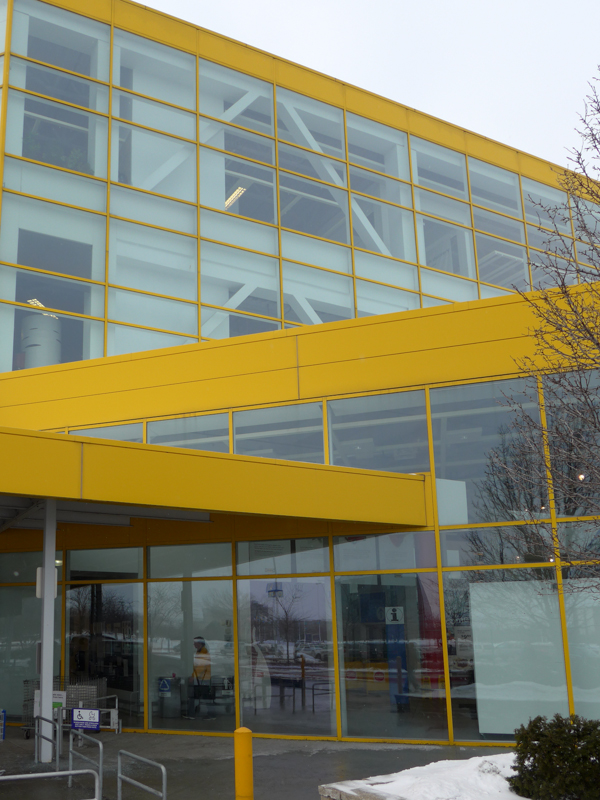 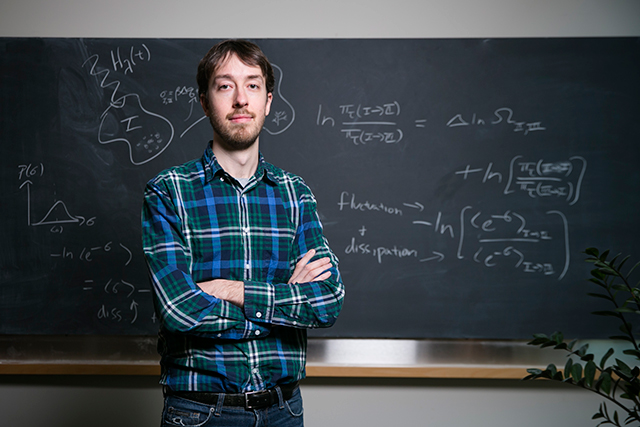 It covers a story about an MIT student, one Jeremy England, who seems to have some grand ideas about life’s origins from a physics perspective.

Wolchover spends a lot of time in the lead discussing the idea that this article doesn’t change or dismiss Darwin’s theory of evolution, something most educated people wouldn’t assume off the bat unless explained otherwise.

So it starts slow. I imagine it’s for the loads of people who might misunderstand evolution as a theory of life origins.

Go check out the article. It’s a good read.

Other recommendations at digg: