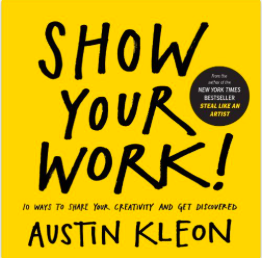 The last couple of days, I read and finished a book by Austin Kleon called Show Your Work! 10 ways to share your creativity and get discovered.

The only thing I read when I borrowed the ebook from my local public library was “Show Your Work.” The little subtitle about getting discovered didn’t appeal to me.

But as I sit here self deprecating about borrowing a book about getting discovered, which seems very “sell-out-y” to me, I think, “So what?”

It encourages you to chip away at your own art. To share something every day. To start documenting your own process and when you’re ready, share that. These are things I already try to do.

He presents the idea of hanging with like-minded people from an idea stemming from Brian Eno’s concept called, “Scenius.” It’s a derivative (in a way) of “Genius”. It’s basically the idea that if you are associating and hanging with artists, you’ll pass ideas, steal from each other, do more and essentially succeed at creation because of the ricocheting encouragement.

I should remind everyone that “genius” is comes from the Latin verb genui, genitus, “to bring into being, create, produce”, as well as to the Greek word for birth.[4]

There were two quotes or moments in the book that gave me the holy shits!

One was from the author Annie Dillard, who writes a lot of religious oriented books that my mom and sister read. One of my first production jobs ever was that I interned for this videographer who interviewed Anne Graham Lott about writer Annie Dillard.

The quote I took from this book was:

“The impulse to keep to yourself what you have learned is not only shameful, it is destructive. Anything you do not give freely and abundantly becomes lost to you. You open your safe and find ashes.”

The second quote I wanted to share is a passage from the book:

People need to eat and pay the rent. “An amateur is an artist who supports himself with outside jobs which enable him to paint,” said artist Ben Shahn. “A professional is someone whose wife works to enable him to paint.” Whether an artist makes money off his work or not, money has to come from somewhere, be it a day job, a wealthy spouse, a trust fund, an arts grant, or a patron.

This quote means a lot to me. Because over the past 20 years of my career, I’ve had jobs I hate. I have had to supply my own art with capital from jobs. At first, I worked for the man. I had two “big-boy” jobs. One was for a newspaper and the other as a graphic designer for a large trade show producer.

Then I went on my own in 2002. But for the majority of my career, I’ve had to make a transition from supplying my own capital to create my own work. Fortunately, the past five years or so, I’ve made the transition to — let’s say — 80% exactly what I want to do and around 20% what I need to do to supply my passion, which is interiors and architecture as well as making cool videos.

The struggle as an artist is how much do you talk about, promote, show work from your (my) other jobs? Those jobs have contributed to my whole being?

But over the past few years, I’ve basically hid the fact that I shoot events. I shoot less and less of them per year. But I still use them as a means to an end.

It’s still a conundrum, but I’m starting to think, why hide who I am? Why?

Any advice you have, I’m all ears.

It came on HBO when I was five, and my mom subscribed to cable around that time and that’s when we — my brother and I — watched Star Wars just shy of 8 billion times.

When Empire came out in 1980, I’m not sure how, but I’m pretty sure our parents took us to see it in the theater. I was five. Our imaginations soared. We were buying the toys and the figurines as fast as we could.

In ’83, Return of the Jedi came out, and I was old enough to see it alone with a friend. I saw it before my brother. And I was DYING to give away the secrets.

Then we all sat around and waited for the next series to come out. The Prequels. Which, in all honesty, I happened to like. Well, I enjoyed large parts of I and II. Number III was neither here nor there.

So many hated it.

Then we had to wait for these new ones to come out. But the galaxy has turned on its head and we’ve got Star Wars movies releasing everywhere like a family with the diarrhea vomits. They are frequent and everywhere!

I really didn’t LOVE Rogue One. I enjoyed it. But this Solo movie, I think I’m going to enjoy.

Full disclosure, I was “too busy” when the Last Jedi came out, so I haven’t even seen it yet. I didn’t want to feel rushed or cheated by anxiety when I saw it. So I’m waiting for it to release via Amazon or whatever streaming option. That’s okay. I’d rather watch it on my little screen and savor it, than any other option.

Enjoy the trailer and the thrills!