If you scream loud enough that the left has become “unhinged” it must be so right? There’s an all out war to copy every goddamn talking point the left has ever called the right, and make it sound like a pejorative. 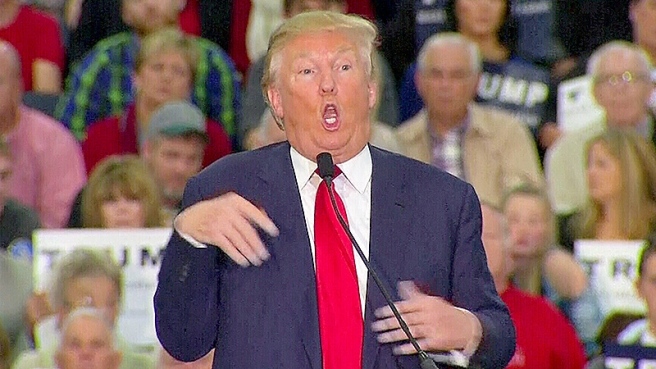 Gotcha-questions Sarah Palin and the screaming Tea-Partiers didn’t pave the the way for this “unhinging”.

The revitalization of Nazis, white supremacy, extreme religious zealotry did nothing either.

This running list from JOHN PAVLOVITZ seems to cover some bases:

That’s the card you’re pulling now, Trump supporters?
That’s where you’ve landed?
That’s your go-to play at this stage of the game?
It’s a little late for you to roll that out now, isn’t it?

After voting for a self-proclaimed genitalia-grabber.
After he suggested dissenters at his rallies should be beaten up.
After hearing him call violent nazis “fine people.”
After he bulldozed sacred Native American lands and turned frigid hoses on tribe elders.
After he ignored mass deaths in Puerto Rico and vilified their public servants.
After he began dismantling protections to our planet and shrinking our national parks.
After witnessing Flint, Michigan go without clean water.
After watching exhausted refugee families stranded at airports.
After leveraging religion to justify all manner of discrimination.
After ignoring evidence of a Russian interference that threatens our national sovereignty.
After seeing ICE raids in hospital rooms and workplaces.
After his gross, reckless fabrications about Muslims and Mexicans and immigrants.
After witnessing him work tirelessly to take healthcare from the sick and the poor.
After he vilified kneeling black athletes and badgered their employers into silencing their peaceful protest.
After his unhinged Twitter rants against private citizens and their businesses, against celebrities and political opponents and world leaders.
After terrorizing teenage shooting survivors on social media.
After allowing the radicalized Christian right and soulless NRA gun zealots to shape national policy.
After sanctioning Steve Bannon and Stephen Miller and Sebastian Gorka and Jeff Sessions.
After retweeting the toxic filth of Dana Loesch and Laura Ingraham and Ann Coulter.
After celebrating while he’s alienated our greatest allies and aligned with malevolent dictators.
After your silence in the face of migrant children being ripped from their parent’s arms and placed in dog kennels.
After digging in your heels for the past two years on every bit of it.

One thought on “The unraveling of America’s tapestry … who done it first? Bum bah bum!”