In a previous article, I wrote about the bullshit of “both sider-ism“. After writing it, I mused a bit about things I didn’t include in the piece.

One large thing was the concept that people seem to care more for perceived overly dramatic politics than civility and strength within familial bonds. Those priorities are fucked up.

It’s like the wave of “political” tribalism is more formidable than the family tribe to the point that it outweighs all rationality and loving discourse.

This article in the Intercept is a notable read. And while most Fox News eradicate their addictions to conspiracy theory and bright-blinking, flashy yellow journalism, I feel that we all need to keep trying.

A snip from the article but you have to read the whole thing:

IN THE EARLY 1990s, some of the smartest people resisting Serbian President Slobodan Milosevic worked out of a chaotic office in the center of Belgrade. The office was filled with a haze of cigarette smoke, ringing phones answered with shouts, off-kilter desks scarred by abuse, and half-empty bottles of liquor. This was the nerve center of Vreme, an opposition magazine presided over by the wise-cracking Milos Vasic.

A cross between Seymour Hersh and Ida Tarbell, Vasic saw beneath the surface of things. He realized that his small magazine made little difference to Milosevic, who had instigated and fueled the brutal wars in neighboring Bosnia and Croatia. There was just one media platform that mattered: state-controlled Radio Television Serbia, which was a relentless promoter of the Serbian strongman and his eliminationist agenda.

Vasic had a sharp analysis of how Serbs, in their susceptibility to indoctrination, were not unique. “All it took was a few years of fierce, reckless, chauvinist, intolerant, expansionist, war-mongering propaganda to create enough hate to start the fighting among people who had lived together peacefully for 45 years,” Vasic said. “You must imagine a United States with every little TV station everywhere taking exactly the same editorial line — a line dictated by David Duke. You, too, would have war in five years.”

Instead of a former grand wizard of the Ku Klux Klan, we have Rupert Murdoch as the founder of Fox News, which for years — starting long before Donald Trump’s presidency — injected racist, anti-Semitic and anti-liberal tropes into the American mainstream (remember the war on Christmas?). Fox isn’t watched by everyone, but for those who do watch, Fox is everything. As my colleague Jon Schwarz wrote the other day, it’s possible to imagine the political violence of the past weeks occurring even if Hillary Clinton had been elected president — we can take Trump out of the equation, and we still might have crazed Americans trying to kill other Americans because of their religion, skin color, or party affiliation. But it’s impossible to imagine these attacks occurring without years of Fox News spreading the ideology of white nationalism. The network promotesconspiracy theories that begin in the bowels of the internet, and it feeds into those bowels an army of converts willing to go further than Fox & Friends dares. 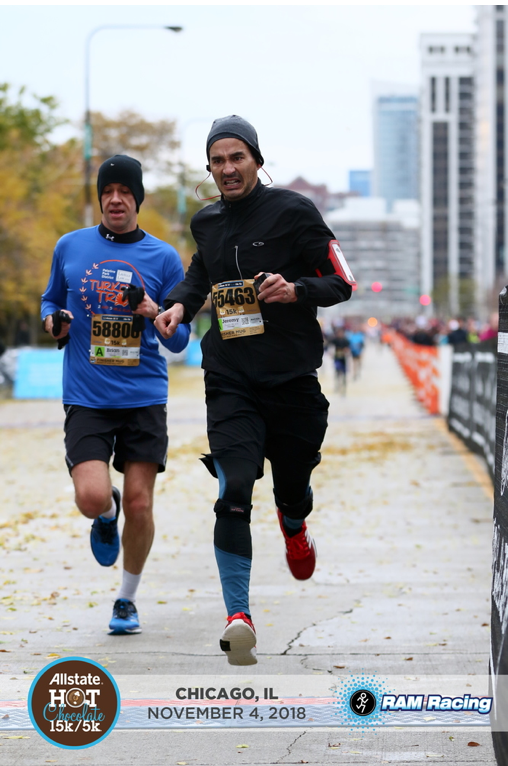 On Sunday, I ran my first 15k, that’s 9.32 miles. The race is called the Hot Chocolate, and I really had no idea what to expect in terms of how many people turn out and even the nitty gritty of how to navigate the starting corrals, where to park, how to kind of avoid the abundance of people.

Between cheerleaders, onlookers and participants, I imagine there were well over 40k. People were everywhere. It was almost nauseating how many people.

I’ve been running unprofessionally since I was a kid. On the playground. In the neighborhood. On the soccer field. I was never on a track team. But I’ve enjoyed running, maybe as much or more than soccer.

Two years ago, I broke a toe playing soccer and I decided I wanted to stay away from rough sports that could injure me and keep me from my work.

After that injury, I started running more distance.

About a month or more ago, a friend of mine, Adam, asked me if I wanted to consider running in the 2019 Chicago Marathon. He was recently getting into running, enjoying it, and maybe he was interviewing his friends for a co-runner compatriot.

Before we talked about it, I never knew what it would take to train for a marathon. The biggest nuance to training is that you run way more often, much slower than I was training, and then picking it up once or twice a week. I was almost always running at race pace, which is much more difficult as I am getting older.

I’m a 43 year old male. My only other race experience was a suburban 5K turkey trot, two years ago. I crushed the race at a 6:40 pace. But it didn’t get me any closer to running races with any frequency.

This gives me a better understanding of what to expect as I go forward.

With this experience behind me, I think I’m going to take away a few things:

More pictures below the fold.  END_OF_DOCUMENT_TOKEN_TO_BE_REPLACED