Despite what dentists keep telling us about the protective effects of fluoride on people’s teeth, virulent myths insisting otherwise somehow manage to persist.

These kinds of mistaken beliefs might be false, but their consequences are very real. Like when, in 2007, the people of Juneau, the capital of Alaska, voted to stop putting fluoride in their drinking water, over concerns about what harms it might be doing to them.

Tina found this excellent article on a man who doesn’t drink, but drinks.

I am now 43. And apart from when I gave up booze for six months when my wife was pregnant with our son I have spent 29 years as an adult regularly ingesting alcohol. Which is a depressant. So there are only six months of my life as an adult where I have not been regularly ingesting a depressant. This realisation has really shocked me recently. I have no idea what it means to be the adult version of me without taking a drug that makes you depressed.

I gave up for three months and tried to be conscious of how not drinking made me feel. Giving up booze turned out to be incredibly easy once I thought of it not as denying myself something but as deciding not to regularly ingest a depressant. Above all it was a relief. When you home in on the absence of that grouchy feeling not drinking makes you feel like a superhero. You wake up every morning and feel good. And if you remember how you used to feel waking up hungover that feeling of waking up with a spring in your step becomes incredibly addictive. Like happiness even. Even when you haven’t slept because your new baby has kept you up all night you still feel ok. Because it turns out you can cope with not sleeping when you have a new baby. What you can’t cope with is having a hangover and not sleeping with a new baby. You also have more money. You lose weight. There is a kind of lightness to living when you are not regularly ingesting a depressant. I know how obvious this sounds but I had never thought of it in this way. Who knew? While enjoying this new frame of mind the thought of having a drink begins to feel a bit silly. Pointless even. Absolutely not worth the hassle.

I’m a week into taking at least a month off of booze. This weekend was a huge test. We scheduled two late night social events in a row. One with family. The other with great friends. Creatives. A large part of it was at a music venue event where EVERYONE was drinking. But me.

My first time off of booze for any length of time was last January 15 to March. And then throughout the year, I was able to keep away for days at a time.

Even when I had a light stand fall on a Ferrari Testarossa, damage it, and deal with the repercussions with the owner, I stayed off of alcohol. That was a HUGE test.

As the writer in the piece I linked to describes, not drinking is a sort of betrayal. If you’re not drinking and everyone else is, people side eye you. They inadvertently show you their disappointment. It’s not just an internal worry or delusion.

It also prompts a similar sentiment of, “I need to do that.”

So for all of that, I’m grateful to take this month off (or more depending). I know I can do it. And I know it’s better than the alternative.

I like to try to get between 7 and 8 hours of sleep. It’s a new thing I started in the last few years and I LOVE it. I wrote in my journal on Sunday after just 6 hours of sleep and only 6.5 the night before:

“Not enough sleep sober is way better than 8 hours after drinking.”

In fact, the Dry Alabama campaign, not previously reported, was the stealth creation of progressive Democrats who were out to defeat Mr. Moore — the second such secret effort to be unmasked. In a political bank shot made in the last two weeks of the campaign, they thought associating Mr. Moore with calls for a statewide alcohol ban would hurt him with moderate, business-oriented Republicans and assist the Democrat, Doug Jones, who won the special election by a hair-thin margin.

Taking a note from the Russians? What jerks!

I don’t know why Mel Magazine chose to write about and rank 18 veggies from Asparagus to Blooming Onions (in this article), as if there aren’t any decent vegetables between straight corn and a breaded, fried onion. But it’s good to get veggie encouragement.

I’ve been reading Michael Pollan’s Omnivore’s Dilemma, and his discussion of corn growth and consumption is spot on with this article. Although there are hundreds of veggies left off the list, I think. 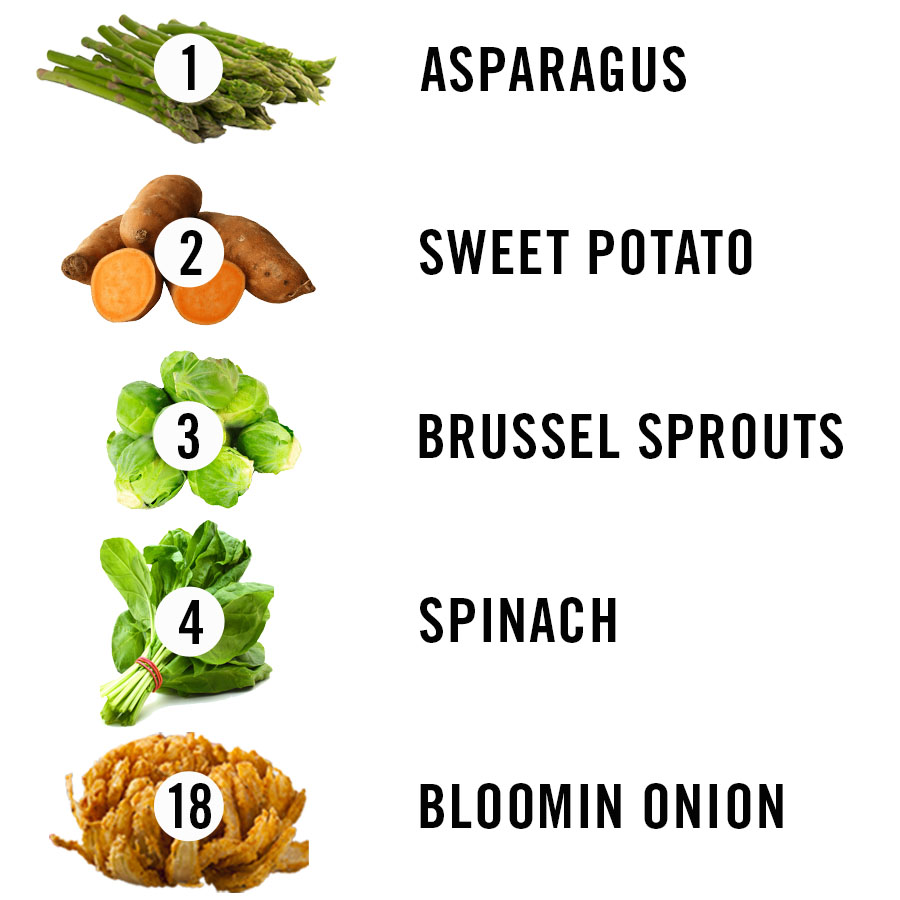 1. Asparagus: “This tasty green stalk comes in first place on my vegetable ranking,” Friedman says. “Asparagus is a great source of vitamin K, which helps with blood clotting and building strong bones.” Friedman also mentions that asparagus provides vitamin A (which prevents heart disease), vitamin C (which supports the immune system), vitamin E (which acts as an antioxidant) and vitamin B6 (which, like vitamin A, also prevents heart disease).