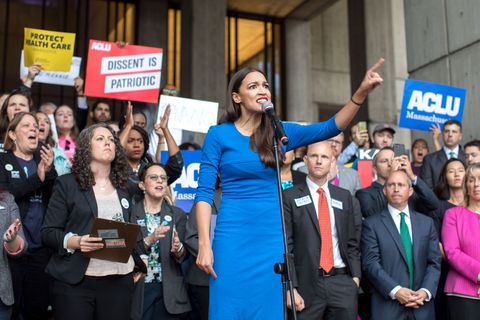 In Tuesday’s Washington Post, Max Boot, the former imperialist cheerleader now d/b/a Never Trumper extraordinaire, addressed one of the nation’s pressing problems: the popularity of Alexandria Ocasio-Cortez, rookie congresswoman from New York and subject of a current conservative obsession bordering on a full-on manic episode. I admit, I was dubious about AOC. I thought that her joining Bernie Sanders in trying to submarine Sharice Davids in a Democratic primary was an obviously avoidable blunder, and I thought the hype surrounding her upset of Joe Crowley far exceeded the actual political accomplishment.

But then, for reasons we will get to in a minute, the entire conservative movement decided to make her a national brand, and it did its job splendidly well, and then she did the rest. Did they actually think that a collection of aging gray-boys was going to out-heckle a former NYC bartender? Did they think they were going to beat someone of her age and obvious savvy on social media? (Didn’t getting whipped like rented mules by the Parkland survivors teach them anything about that?) She literally danced in their faces, and then she danced in their faces again. And people loved it in ways the gray-boys will never understand.

One can always hope that Giuliani knows what he’s talking about in this case.

There are about 7,000 languages spoken around the world — and they all have different sounds, vocabularies and structures. But do they shape the way we think? Cognitive scientist Lera Boroditsky shares examples of language — from an Aboriginal community in Australia that uses cardinal directions instead of left and right to the multiple words for blue in Russian — that suggest the answer is a resounding yes. “The beauty of linguistic diversity is that it reveals to us just how ingenious and how flexible the human mind is,” Boroditsky says. “Human minds have invented not one cognitive universe, but 7,000.”