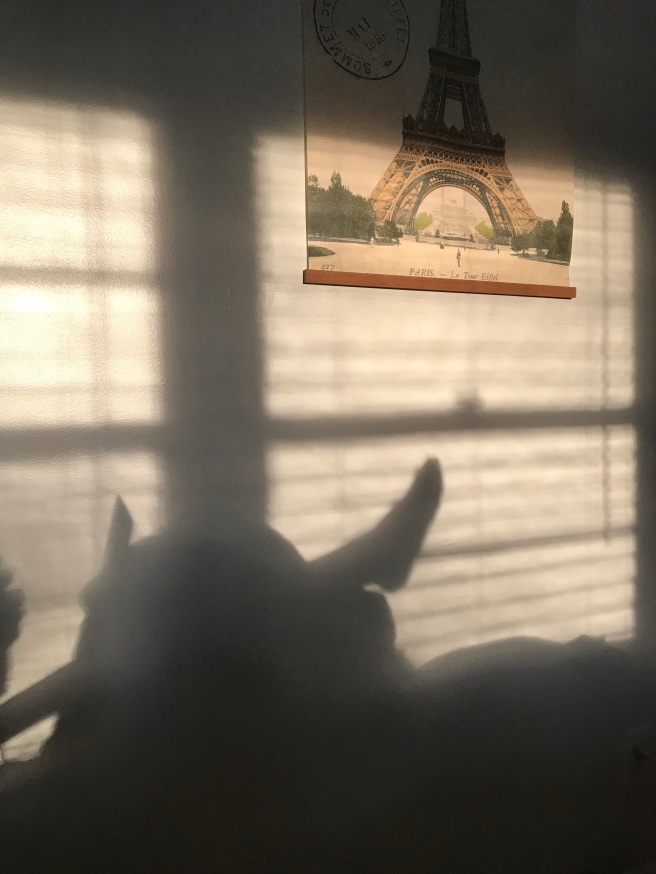 Tina-beans and I are doing our best to stay quarantined-ish. We drove down to North Carolina a week ago last Thursday and we’re hunkered down here until this whole Covid-19 thing blows over … if it ever does.

Our current goal is to paint the house. When we bought it a year ago, we concentrated our renovation efforts on the interior. We redid the kitchen, the bathrooms, painted throughout, ripped up the carpet and opened up the dining room into the living room.

Just before all of the shit hit the fan, we reached out to a painter for an estimate to paint the entire house. He was going to charge us $4500 minus materials.

This shut down is turning out to be a way we’re not spending $4500 per se. But we’re spending the materials budget to paint. I should be documenting this project, but my mind just wants to get the damn thing finished. Documenting my own actions often doubles the time to complete any one action.

So far, we’ve power washed most of the house. Tina’s has been weeding the hell out of the yard. It looks amazing. I’ll share pictures soon.

Yesterday, there were shelter in place orders that were to go into effect at 5:30 in the evening.

Just a quick trip to the grocery store took 25-30 minutes to check out.

Since we’re in NC, we’re back in the Yeshua Fog. And it’s very clear.

We hear a lot of words of encouragement that are religious. We get texts with how much God loves us. “Turn to Jesus in these times of trial.” I have received links to sermons. And we’ve seen a number of news clips on local affiliates in which they report on nurses and doctors in prayer circles. Wow. Just wow.

You have people wondering aloud the talking points of right-wing propaganda. “Kids don’t get coronavirus, you know?”

Dogs can get coronavirus, you know?

“Look what they’re doing to Joe Biden. His dementia is so out of control, he can’t put a sentence together. Have you seen him try to talk?”

In a contest of dementia, Mr. Trump wins the gold, silver and the bronze.

In Chicago, we have friends of all stripes, but none are as enthusiastically pro-Trump than these folks down here. It’s one thing to support a president. But the views without a critical eye are dumbfounding.

I was telling my best friend the other day how it can be viewed as providential that we basically are seeing such a positive option for ourselves that we bought this house and can escape Chicago for more space, lovelier weather and a gentler, relatively kinder population.

Later, I realized what I had done was brag about my good fortune, relating it to a superpower, only to remember that that is what religious people do. They boast about providential love, goodness and benefits, but forget that those same blessings have been denied to so so so so many who would LOVE to benefit, but will never know those advantages.

I’m not cocksure about anything, and do not wish to hear how someone else is cocksure that this virus is “not as bad as what the media is making it out to be.” It’s not just the “media” informing me. It’s those accounts on media of first-hand experience. It’s the direct words coming from the experts. It’s firsthand discussions with people in Spain and Italy.

I’m not cocksure that heaven exists and that should I, or my loved ones get sick and die, I don’t have any first-hand experiences with people showing heaven (or hell) exists. So I’m not sure. Therefore, I have no right to say yes or no. But for those who are cocksure, I hope to heaven you’re right about YOU going to heaven. And I hope you’re wrong about everyone else going to hell.

It’s troubling me that we live in a fog where the majority of people assume the veracity of a supernatural story involving a man, his birth, life, death and resurrection with nothing but a book to document it and a tradition of viral information passed from generation to generation. No pictures. No video. Just rumor.

But in a world of documented cases. In a world of video, picture and sound … that causes “disbelief.”

Part of me wonders if dedicating so much of the “Faith” muscle to one thing fills up the capacity to let anything else in. “Sorry World. My cup is full of walks on water, turning water into wine and casting demons into pigs. Your photos of hoards of Italians crippled by a virus attached to respiratory machines … I am the equivalent to an atheist to that level of evidence.”

Let me run away from this religious and political mind wandering.

What’s fun is how Tina LOVES that everyone waves while driving or walking through the neighborhood.

Yesterday, at our grocery store, which was packed at the checkouts, and the floors indicate how far to stay away from the person in front of you, we were behind a woman checking out with $200 of groceries. The cashier and she were friends, and they were catching up so the check out took about 25 minutes. I swear.

There was a sale on a large tropical plant for $21. “Can I get one?” asked Tina with childlike pitch and enthusiasm. I’ve been trying to break her from frivolous purchases, but the cost and size of this monster plant, and Tina’s absolute LOVE of plants and gardening has increased over the years.

She squealed and ran off to pick out which plant she wanted.

She returned with a plant roughly 7 feet high, holding in two hands. It covered her face like she was in a sitcom trying to pretend she was a bush to sneak up on a bad guy or spy on the meeting of evil geniuses.

The lines of people around us were growing. And a conversation was started about the plants, how much they cost, and then it went into, “I have a fiddle leaf fig. And it almost died, but then I did X, Y and Z and now it’s huge and beautiful.”

Then Tina raced off to take another look at the plants. She returned with one she liked better. And then left again with the first one she chose. And there we all stood, 6 ft apart, wondering if any of us would ever check out.

We barely inched forward and Tina ran off again to check the plants for one she liked even more.

A third time, she returned with a larger, bigger, better plant in her arms, like an unwieldy child with ship sails as a head.

“Is she going back a third time for one of those plants?” I asked with a smile to all my comrades in line. There was a communal laugh. “I’m glad my wife can provide entertainment for all of you while we’re waiting in line.”

“What?” Tina asked as she neared and heard the laughter.

“You’re entertaining all our new friends,” I said. “People should be throwing money in your hat for this level of fun.”

It was a nice shared moment among our friends in line.

May we all stay in good moods and keep our spirits up during this difficult time!