What a nice shot, man.

I snapped these the other week at that loft party I shot.

I’m busy as a mother fucker. I have to finish a lot of editing before next Monday. I’ve got a three blogs in the queue, but they’re dwindling. I’ll make time during rendering to collect some more information to post. In the meantime, you’re stuck with these shots to stare at.

Just a reminder, if any of the watermarks turn up as r25 productions, that’s my production company. The r25 web site is very neglected I might add. You should fan the r25 productions facebook site as it would give me goose bumps and tingles all in my nether region.

More shots below the fold.

END_OF_DOCUMENT_TOKEN_TO_BE_REPLACED

Activist and author Dan Savage says, “We have to de-escalate this kind of rhetoric.”

In other news, Brit Hume applies for a cashiers’ position at McDonald’s.

And then old Hume went on O’Reilly (below). This is 2010 (TWO THOUSAND TEN!), and the “news” is featuring people talking about something as personal as spirituality and faith. Faith has no place on the news. Nothing that cannot be demonstrated physically has any appropriate place on something claiming to present objective facts.

Hume and O’Reilly don’t believe the same precepts or conditions of heaven’s entry. What’s worse is Hume says, If Woods converted, we’d be able to tell because of the shining bliss emiting from Wood’s aura. If that “sheen” resembles anything that is emiting from Hume or O’Reilly, let’s hope Wood’s keeps his distance. If those guys are examples of decent Christianity, retire that faith kids, the war is over.

I give this three appalling looks and a couple of piercing stares. Let Woods suffer, try as hard as he might to figure out his life, and let him move on.

This is a guy who swings metal for a living and makes more money than I do in a year while wiping his ass. Actually, all these guys are. And they are “thought leaders.” It makes me sick.

This is cool. Go to this site and follow the directions. Here’s the description of the site (emphasis mine)

Click-drag green circle to pan around the whole image.

The Ultra Deep Field obtained by the Hubble Space Telescope is the deepest view into the sky by humankind to date. This image combines 800 frames with a total exposure time of 1 million seconds. The 10.000 galaxies that are visible have distances out to times where the universe was just 800 million years old, one seventeenth of its current age. For more info check the UDF press release at spacetelescope.org.

For a wider but less deep view visit the GEMS Skywalker. 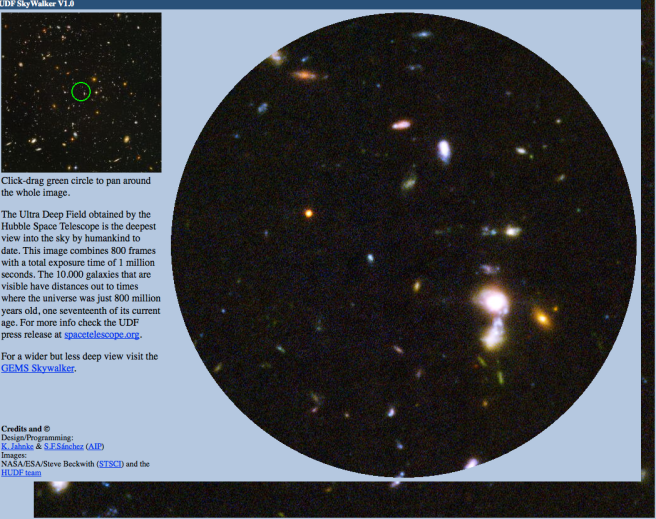 I took particular interest in the angiogenesis bit and the “God, it appears, is a Trekkie” thing.

I bet you didn’t know that was Bono’s last name.

Friend and kickass blogger Julie over at Attempts at Rational Behavior got a shout out from Blag Hag on Sunday. The blag hag herself constructed a fine — and long — list of atheist women bloggers.

You should go congratulate Julie. Squeeze her cheeks and tug her toots while your there. She’s been finding some hilarious tweets. Her blog keeps getting better and better.

The bitch Blag Hag herself was in town this weekend, and I missed an opportunity to hang out with her, Hemant Mehta and a handful of other fine local atheists. The meet up was in Palos Hills, which is close to where Tina’s cousin Kelly lives. If we weren’t dogsitting this weekend, I would have gone.

The Skeptics Annotated Bible is a great resource for kids like me. Unlike many religious sites, it offers a whole range of views, even views that oppose itself. It’s this kind of freedom from fear, this sort of relative transparency, that we skeptics love to promote. Instead of saying you should or shouldn’t, we promote exploration.

I was lurking on my twitter account recently. I haven’t been very active lately thanks to some heavy deadlines. But I noticed a friend who needed references to the biblical view of slavery. She was in a discussion and needed some quick references. I jumped in and linked her to this page, which has all kinds of great info (scroll to the bottom). What was great was I wasn’t the only person who sent her a link for the SAB.

I thought I would pass along this info to you, my dearest readers. Be sure to check out the annotated koran and book of moron Mormon.